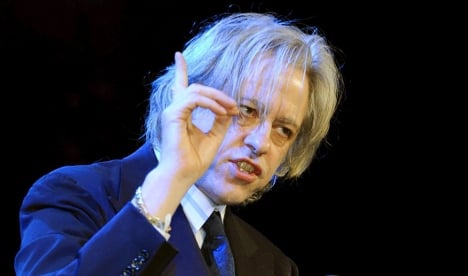 “In our view this budget is not enough, not to uphold the associated German promises,” Geldof told daily Die Welt.

As a representative of the global aid foundation ONE, Geldof met with Niebel to discuss the aid plans of Germany’s new ruling coalition of conservative Christian Democrats (CDU) and pro-business Free Democrats (FDP). In late October, Niebel said that China and India are too prosperous to be considered “developing nations” and therefore should no longer receive financial aid from Germany.

“Look, I’m Africa-lobbyist,” Geldof told the paper. “If the money is to be redirected, then I say personally – Good, Africa needs the help most. Seventy million for China as an economic power is negligible. In Africa, however, such an amount can help substantially.”

Most Germans agreed with his assessment, he said, citing an October 2009 Emnid poll, which demonstrated that in spite of the crisis, 57 percent of Germans want to uphold aid commitments to the poorest countries.

Geldof also called on the new government to rethink the EU’s agricultural subsidy policy, which “destroys markets and distorts competition in Africa. This is in contrast to the CDU and FDP philosophy.”

The activist also said he was pleased that programmes for climate change and poverty reduction would not be in competition for funding.

“Fortunately, Niebel said clearly that he wants to work with for separate funds for climate change. This is important because the effects of climate change mean additional burdens for the poorest,” said Geldof.

Geldof told the paper that he found the FDP’s Niebel, who only recently was calling for the German Development Ministry to be abolished, to be “competent,” and added that it was up to him what he achieves in his new post.