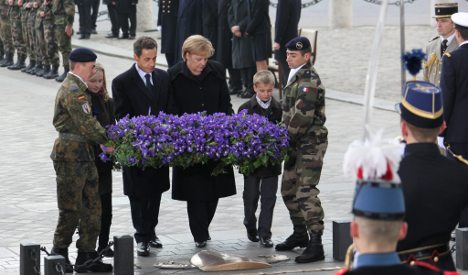 “We are not commemorating the victory of one people over another but an ordeal that was equally terrible for each side,” French President Nicolas Sarkozy declared before a military honour guard and crowds of well-wishers.

Sarkozy and German Chancellor Angela Merkel, in a symbolic appearance to signal ever closer Franco-German ties, rekindled the flame on the tomb of the Unknown Soldier at the Arc de Triomphe at the top of the Champs Elysees.

French and German flags fluttered and military bands played each country’s national anthem as the leaders laid a wreath at the tomb and vowed that never again would their nations wage war on each other.

“We cannot wipe out the past but there is a force which can help us to bear it: The power of reconciliation,” Merkel said in a speech which, like Sarkozy’s, emphasised the two countries central role in European Union.

“We show other countries in the world that it is possible to rise above the pain of the past,” said Merkel, whose country has waged three major wars against France in the past century and a half.

The commemoration came just two days after Sarkozy visited Berlin to attend along with other European leaders celebrations marking the 20th anniversary of the fall of the Berlin Wall.

German leaders have attended memorial events in France before, most notably when chancellor Helmut Kohl took president Francois Mitterrand’s hand in Verdun, the scene of one of the fiercest battles of the war which lasted from 1914 to 1918 war.

But Merkel’s visit Wednesday was the first time a German leader attended the Armistice Day ceremony in Paris marking the defeat of Germany after four years of trench warfare that left millions dead.

The two leaders observed a moment of silence at the Arc de Triomphe, flanked by soldiers from a Franco-German Brigade and officers from both countries’ armed forces.

The silence – at the 11th hour of the 11th day of the 11th month – marked the moment 91 years ago when the guns fell silent across Europe after Germany signed an Armistice Treaty with its Allied foes.

Relations between the two leaders were strained last year over what the French president saw as Germany’s slow reaction to the global economic crisis. But in recent months they have improved, and late last month Merkel flew to Paris for dinner with Sarkozy just hours after German lawmakers confirmed her return to office at the head of a new right-wing coalition.

Sarkozy said this week he wanted to make November 11, which is a national holiday in France, “a day of French-German reconciliation in order to build a shared future.”

World War I pitted Germany, Austria-Hungary, and Turkey against France, Britain, Russia, Italy, and, from 1917, the United States. Much of the fighting, which left around 10 million dead, happened in northern France and was characterised by horrific trench warfare.

Far from being “The War to End All Wars”, the so-called Great War merely set the tone for the 20th century’s litany of brutality, although in terms of sheer mass killing on the battlefield it has rarely been equalled since.