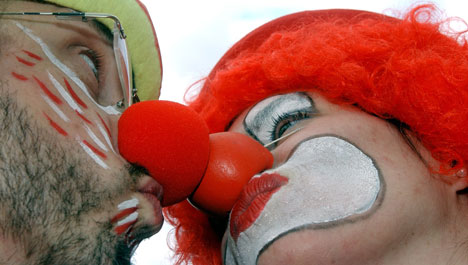 Several other Rhineland cities, including Düsseldorf and Bonn, will also celebrate the beginning of Karneval with their own traditions.

Known as the “fifth season” of the year, Karneval starts on the eleventh day of the eleventh month at 11:11 am – but only for one day. Then the festival, based in Catholic traditions, is suspended through Advent and Christmas until the New Year when the Jecken, or jesters, hit the streets for several days of alcohol-fuelled celebration beginning on the Thursday before Lent.

Click here for a photo gallery of the Jecken in past years.

This year’s Karneval motto is “In Kölle jebütz,” or “Kissed in Cologne,” in the city’s regional dialect. Drunken jesters will take over the city for the better part of a week for parades and plenty of debauchery.