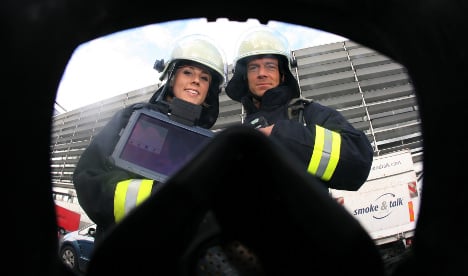 “The police and fire departments were prepared for the worst,” police in Düren said in a statement.

The young man described what he assumed to be a gas explosion that “came from below” in dramatic detail as the call was interrupted by his coughs and wheezing.

“They should bring all gas masks,” the man said according to the police.

They arrived on the scene around 1:30 am to find the man wearing his own gas mask and waving. He then described how he had sat on one of his chairs as a loud bang occurred, filling his home with gas.

But police found that he had actually sat on a loaded gas-powered pistol tucked between the cushions a few days earlier without a locked safety.

The man, who had a blood alcohol content of 0.17 percent, refused to remove his gas mask and continued to “boast of his brave self-rescue,” the statement said.

Police confiscated other pyrotechnic objects and tear gas from the apartment full of rubbish and are investigating whether they can press charges for the false alarm or illegal weapons possession.