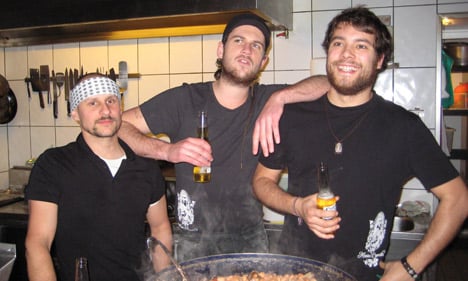 Before Maria Bonita set up shop in Berlin’s Prenzlauer Berg district, the only authentic Mexican for sale in the German capital was produced by a lone man who hand-pressed tortillas in his own kitchen and delivered them by bicycle.

His name and website were whispered breathlessly between spice-starved expats indignant over the bland and bungled restaurant imitations, where ketchup with onion bits passed for salsa, pre-packaged tortillas gummed up their guts, and kraut – that’s right, kraut – rounded out the garnish.

When the California-style burrito shop Dolores finally started offering some tasty solace to Berlin residents a few years ago, it in many ways only fuelled the hunger for quality tacos, tostadas and tamales.

It was around this time that the business of Adan Narvaez, the one-man victualler behind La Tortilla Atomica, began to boom. Starting with a single tortilla press, he has since expanded to a larger kitchen with two employees, a more diverse menu and even a regular catering gig at the Mexican embassy.

“Most of my clients are American and when I ask why they’re so hungry for Mexican food they tell me it makes them feel at home,” he said. “It was surprising, but they really know authentic Mexican food. Germans still think it’s just nachos and fajitas.”

Narvaez told The Local he is planning to open a restaurant in central Berlin soon – but he got some formidable and unexpected competition this July when three friends opened the Maria Bonita snack shop on Danziger Strasse.

Within just a few days, the name of the pretty Mexican lass was pulsing through internet chat forums and herds of hungry hipsters were chowing down on fresh fish tacos with sublime chipotle mayonnaise, glorious green enchiladas and guacamole to write home about.

Ramsés Manneck (25), Trey Wright (31), and Julian Boyce (26) met while working at a Berlin tours outfit and slinging burgers at White Trash Fast Food. They came up with the idea for a restaurant that served what Manneck describes as “authentic Mexican street food” in November 2008 when they tired of working for other people.

“It was a definite gap in the market,” Wright, a gringo who grew up near the Mexican border in El Paso, Texas, told The Local.

Manneck, who grew up in Mexico City where he owned a restaurant before coming to Berlin, says he “can’t cook for shit,” but knows what’s good and insists that all their spices are imported from Mexico.

“There is no Mexican food here,” he says. “Food in general here sucks.”

As for why no one has managed to open a Mexican restaurant before, Manneck laughs.

“Mexicans can be lazy – I hate to use a cliché – but this food is labour intensive,” he says.

While Manneck mans the register and waits tables, Wright and Boyce, who hails from Sydney, Australia, cook. The most striking thing about the three is that no matter how busy their tiny joint gets, and despite working 16-hour days, seven days a week, they seem to be genuinely having the time of their lives.

“It’s pretty much the only thing we know how to do,” says Manneck.

And though Wright says he never actually made a tortilla before they started the business, they all agree it has been a success in the four months since they began. Most of their customers are expats, though they are “breaking in” the sensitive palates of their German customers.

“We thought it would be street food, but I guess it has a good vibe because people come in and stay – the restaurant on the corner has started charging to use the bathroom because all of our customers go there,” says Boyce, the most talkative of the group, as he deftly rearranges vats of freshly prepared salsa and guacamole, a task he calls “fridge Tetris.”

In addition to the challenges of operating on a shoestring budget that inspired a creative approach to the restaurant’s decor, the Maria Bonita boys also had to grapple with a shortage of suitable ingredients such as ripe avocados and a very sceptical Corona beer rep.

“They gave us a crappy, leaky fridge,” Manneck says. “They didn’t take us seriously, now they come and visit all the time. We’re one of their top sellers.”

They have since been provided with a functioning refrigerator, and in their limited time off, have found a new business partner and plan to open a larger restaurant with an expanded menu and a bar featuring top-shelf tequila and mezcal.

“There will be more knives and more testosterone,” Manneck told The Local.

The three signed a new lease contract this month for their bigger place, which is expected to open next spring. They won’t say where just yet, but promise it will be in central Berlin.

“And it’s going to have toilet!” Manneck adds. “And late-night debauchery until 3 or 4 am.”

Until then, customers can keep warm and ease their anticipation with a new delivery service and a winter menu that includes chicken enchiladas with mole sauce, mushroom tostadas, lamb tacos and a chili hot chocolate.

“If it doesn’t taste like what I had in Mexico we wouldn’t do it,” Manneck says.