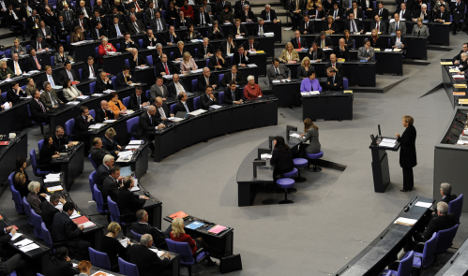 “The new government will lay the groundwork for the second decade of the 21st century,” said Merkel, who was re-elected to a second term on September 27.

She said there would be “unsparing analysis” of Germany’s situation after the global economic crisis pitched the country into its worst recession since World War II.

Facing repeated heckling from the opposition during her address to the Bundestag, the chancellor singled out the economy, the role of the German state, the country’s demographic decline, the sustainable use of the world’s natural resources, and the global threats to liberty and security as her government’s priorities.

“Germany stands before challenges not seen since reunification,” she said one day after the country celebrated the 20th anniversary of the fall of the Berlin Wall. “The problems will get worse before they get better. That’s the situation.”

She outlined a €24-billion ($36-billion) package of tax cuts and other fiscal measures to get the economy moving, but admitted unemployment was likely to rise in 2010.

Merkel also made her first comments about the decision by General Motors not to sell its troubled German unit Opel, saying she “regretted enormously” the US carmaker’s abrupt about-face.

“Any solution will only succeed if GM bears the majority of the restructuring costs with its own means,” she said. “We are expecting General Motors to quickly provide a workable concept that will give Opel … and its German plant the chance of a good future.”

General Motors’ unexpected decision to pull out of a planned sale to Canadian car maker Magna and Russia’s Sberbank sparked fury in Germany and prompted workers across Europe to down tools and hit the streets in protest.

Copenhagen if the US, China and India first make clear their negotiating positions.

“The European Union has developed clear and unambiguous negotiating positions. We now want contributions from the US and from countries like China and India,” Merkel said. “I will make a special personal effort to achieve this. And of course if it is successful, yes, I will go to Copenhagen.”

She rejected criticism that Germany should seek to cut spending in order to keep its deficit under control, saying that the growth spurred by the tax cuts would help cover the cost.

“Creating growth, that is the aim of our government. I say quite openly, there is no guarantee that it will work … But what this offers is the chance,” Merkel said.

Longer term, Germany, like many advanced economies, is faced with a rapidly ageing population, something set to add to the strain on the public purse and that is making it harder and harder for firms to employ educated youngsters.

“There are now more people over 65 in this country than under 20,” Merkel said. “In 2020, there will be three and half million fewer people under 25 than in 2007 … That is 15 percent. In the same period the whole population will fall just two percent. This shows the scale of the challenge facing us.”