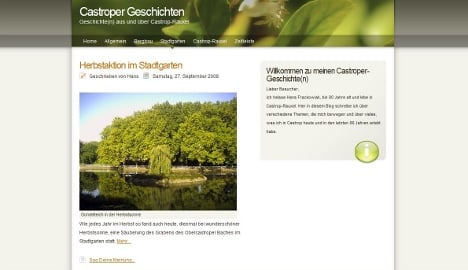 “When I write, it’s like watching a movie,” says Frackowiak. “I let the stories take place again.” Over the last two years, Frackowiak has made more than 100 entries.

He began the project after health concerns rendered him unable to keep up with his usual hobbies.

“Papa, you always told beautiful stories from the past,” Frackowiak says his son told him before suggesting that he keep a blog as a substitute.

Now Frackowiak sits in his office regularly, recording his memories about the Nazi era, his school days, the post-war years, his life as a miner and the decline of the mining industry.

His blog is titled after his hometown, Castrop-Rauxel, in the state of North Rhine-Westphalia, but he also writes about the neighbouring municipalities of Dortmund and Bochum.

“Before, I was scared to use the internet,” says the 80-year-old. “I thought it worked like a drug.”

Although Frackowiak has since dismissed all fears of becoming addicted to the internet, he sticks by an ironclad rule: only one hour per day on the computer.

Robert Basic, a bigwig in the German blogger scene, has appointed Frackowiak as his “virtual grandpa,” which Frackowiak says he found flattering.

“The blog keeps me young,” he said.