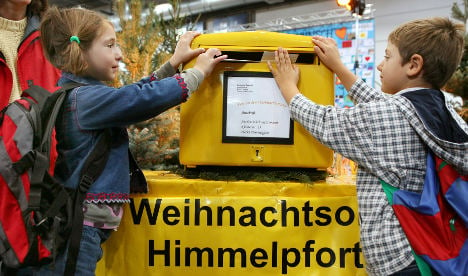 The office is open roughly six weeks ahead of the holiday in anticipation of receiving thousands of letters from hopeful children to Santa Claus. But the first wish lists already arrived over the summer, the company said.

This year the jolly old man known as the Weihnachtsmann in Germany plans to use an environmentally friendly vehicle powered by natural gas to collect the children’s letters, Deutsche Post said. The company did not explain what had happened to Santa’s magical sleigh pulled by Rudolph and his reindeer friends.

In 2007, the post office received – and answered – some 280,000 letters to Santa Claus from children in more than 80 countries. Children from countries such as Ghana, Mali, India and the US have all sent letters to the special post office in past years.

The office in the German state of Brandenburg is the one of seven locations in the country that receives letters to Father Christmas, but the only holiday post office in the formerly communist eastern states.

Letters to the Weihnachtsmann from naughty and nice boys and girls can be addressed to: