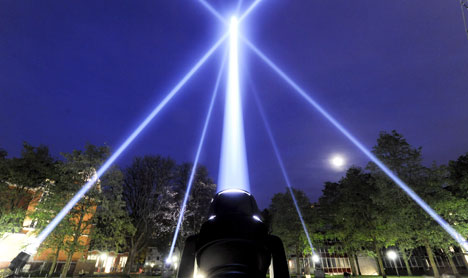 An archive picture from 2008 of a Kristallnacht commemoration. Photo: DPA

“Certainly, we can and we must remember historic moments” experienced by Germans 20 years ago when “the doors of freedom were opened,” said Charlotte Knobloch, president of the Central Council of Jews.

“Certainly people can celebrate. But at the same time we must not forget… that 71 years ago, with the November pogrom, we saw the doors of Auschwitz beginning to open,” she added in a statement.

“Anti-Semitism and inciting hatred remain problems that should be taken seriously in Germany,” Knobloch said.

She highlighted the example of a synagogue which was defaced in Dresden. Police discovered on Sunday drawings of swastikas daubed on a wall of the building.

Swastikas, which are banned under the German constitution, were drawn in black marker pen on one wall of the synagogue, a statement from police in the eastern German city said.

German President Horst Köhler recalled that the dates of November 9 in 1938 and 1989 were inextricably linked. It is only “because we Germans have learnt the lesson of our history between 1933 and 1945” that the world could trust us in 1989 and allowed the reunification of Germany a year later, he said.

“We will always be determined to remember this link and this responsibility,” the president added.

Kristallnacht, seen as a prelude to the Holocaust, saw Nazi thugs attack hundreds of synagogues and Jewish businesses across Germany. Around 90 Jews were killed and some 30,000 Jewish men were arrested for deportation to concentration camps.

Meanwhile in the Serbian capital Belgrade, around 200 people protested Monday against far-right groups on the International Day against Fascism and Anti-Semitism which is organised to coincide with the Kristallnacht anniversary.