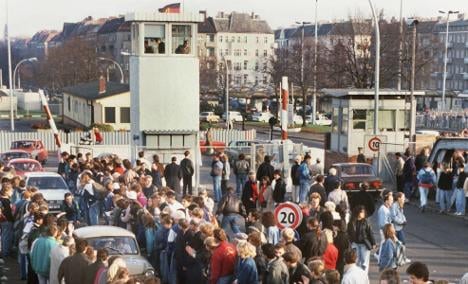 The border checkpoint at Bornholmer Strasse was the northernmost of the inner city crossings during Berlin’s division. According to regulations from the East German government, it was to be used by citizens of the Federal Republic of Germany, the official name for West Germany.

Most noteworthy about this Wall location, however, are the events on the night of November 9, 1989.

After a premature announcement of freedom to cross the border was made by East German official Günter Schabowski to the media, crowds of East Berliners gathered at checkpoints to cross over to the West. Of those locations, Bornholmer Strasse quickly became one of the most congested.

Their passports officially checked, the first to arrive crossed easily, but soon the

crowd grew too large for border guards to control.

As a result, that evening in 1989, Bornholmer Strasse became the first of Berlin’s inner city checkpoints to open completely and without restrictions. On that night alone, approximately 20,000 people flooded over the border, as the city took its first steps towards reunification.

The bridge bears few obvious signs of its significant part in the changes that swept Berlin 20 years ago. Commemoration plaques mark the events of November 1989 there, but are seldom a part of any visitor’s agenda. However, this might soon change after Chancellor Angela Merkel symbolically walks across the bridge, as part of the Wall anniversary celebrations.

“The overall situation there is very poor – it is in a very bad state. We are planning to overhaul the bridge and improve it, establishing a memorial like we have on Bernauer Strasse,” Berlin Wall memorial foundation director Dr Klausmeier told The Local .

“The major changes will be made next year, but we will take the twenty year anniversary as a starting point to bring the site back into our memory. It is pretty far up North in Berlin and very noisy, so it is not an easy place to handle as a memorial.”