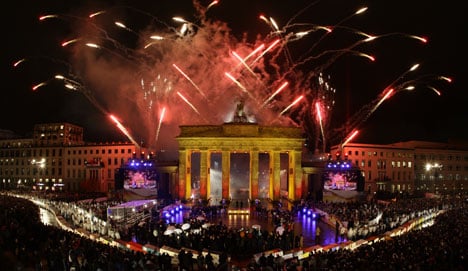 Merkel, who grew up in the East, marched through the historic Brandenburg Gate with British Prime Minister Gordon Brown, French President Nicolas Sarkozy, Russian President Dmitry Medvedev, US Secretary of State Hillary Clinton and representatives from across the European Union.

Surrounded by a giant crowd despite a steady cold drizzle, former Soviet leader Mikhail Gorbachev and ex-Polish president Lech Walesa also appeared at the monument, which now stands as the symbol of German unity.

Click here for a photo gallery of the Berlin Wall celebrations.

In a surprise video address beamed into the ceremonies, US President Barack Obama said he still took inspiration from the courage of East Germans who stood up against their oppressive regime.

But Medvedev said the end of the Cold War did not justify any nation’s global dominance, in a clear swipe at the United States. “The transition to a new multipolar world is today very important for most countries, for all the countries in Europe and the world,” he said.

Crowds surged to hear Berlin’s renowned State Opera orchestra play strains of Beethoven and Wagner and cheered the symbolic toppling of 1,000 giant styrofoam dominoes along two kilometres (1.2 miles) of the Wall’s former course, where border guards once had shoot-to-kill orders.

Sarkozy said the global community still needed to live up to the promise of that euphoric night. “The fall of the Berlin Wall is an appeal, an appeal to all to vanquish oppression, to knock down the walls that throughout the world still divide towns, territories, peoples,” he said.

Brown called the unity of Berlin, Germany and Europe “majestic” achievements. The Wall “was swept away by the greatest force of all – the unbreakable spirit of men and women who dared to dream in the darkness,” he said.

Click here for a photo gallery of the Berlin Wall then and now.

At least 136 people who tried to cross the most visceral manifestation of the Iron Curtain were killed.

But following weeks of protests against the regime, East German authorities suddenly allowed people to travel to the West that autumn night in 1989.

After 28 years as prisoners in their own country, stunned East Germans streamed to checkpoints and rushed past bewildered guards, many falling tearfully into the arms of West Germans on the other side.

“I crossed the border into the West – it was madness,” she said, still breathless from the memories. “There were so many people that we were driving at a snail’s pace.”

Even twenty years later, an overwhelming majority of Germans are still grateful for the Wall’s fall. According to a poll in the Leipziger Volkszeitung daily, with 79 percent of those surveyed calling November 9, 1989 a magical day.

“It was an immense joy,” said Thekla Koehler, recalling the night that the concrete barrier dividing the city and keeping her apart from her family, was no more.

“I fled from the East to the West through Checkpoint Charlie, hidden in a car, 35 years ago,” the 59-year-old told AFP, one of tens of thousands of people in the German capital celebrating the anniversary on Monday.

But sociologist Frithjof Hager of Berlin’s Free University said national unification, sealed in 1990, was still a work in progress.

“I believe the authoritarian mindset is still an issue (in the east) – such things only change very slowly,” he told AFP. “But I think simply pointing the finger at easterners would be deeply unfair.”