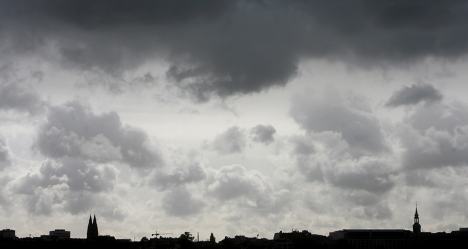 Break out the sun lamps because you won't see the sun anytime soon. Photo: DPA

The entire country celebrates the 20th anniversary of the fall of the Berlin Wall on Monday under cloudy skies, with some rain falling in the former East Germany and in southern Germany. Above 600 to 900 metres, the rain will turn into sleet and snow. The rest of Germany can be content with drizzle. Temperatures will range from three to nine degrees Centigrade.

Monday night and early Tuesday will see heavy rain in the west and northwest along with heavy cloud cover and some fog with temperatures dropping to between three and nine degrees Centigrade.

Tuesday will remain overcast and grey with drizzle turning to snow at higher elevations. Highs will stay between three and nine degrees Centigrade.

The grayness will continue into Wednesday with more rain closer to sea level and snow in higher areas. Temperatures will stay seasonable between four to nine degrees Centigrade, dropping to two degrees in the mountains.