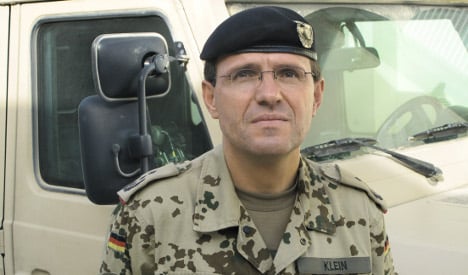 The chief state prosecutor’s office in Dresden handed the case over to the country’s highest investigators, who must now decide whether Klein’s decision to call the attack, which resulted in the death of up to 142 insurgents and civilians, was in line with international criminal law.

Just after the incident occurred, Berlin contended that only Islamist insurgents had been killed in the bombardment, but later admitted there had been an unspecified number of civilian victims. Klein was then accused of violating NATO’s rules of engagement by calling the strike.

Last week, NATO released a secret report to German authorities about the September 4 air strike on the two fuel trucks taken by the Taliban in the northern Afghan region near Kunduz.

The Bundeswehr’s top commander General Wolfgang Schneiderhan then said in a speech that he was convinced the German officers involved in the controversial attack acted correctly in what was a “difficult operational situation.”

Defence Minister Karl-Theodor zu Guttenberg said Friday that the bombardment was “appropriate” and that he did not doubt Schneiderhan’s assessment.

Guttenberg said he assumed that civilians were killed and that he regretted each victim “from the heart and deeply.”

While he admitted there had been “procedural errors,” he said there would still have been an air strike nonetheless.

But Green party parliamentarian Omid Nouripour on Friday said it appeared Col. Klein was at fault for not following proper military protocol in the deadly incident.

“I can tell you after reading the report that I don’t have the impression our allegations were wrong,” he told German broadcaster Deutschlandfunk.

Nouripour encouraged the government to craft its own report on the incident, which he said Washington has done in a similar case.