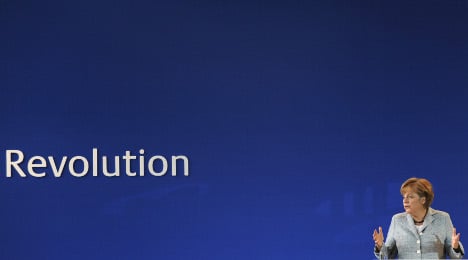 Reminiscing to foreign reporters in Berlin this week, Merkel told how she stuck to her weekly routine as a 35-year-old research scientist even as history was made around her.

“I thought something was going to happen, and had heard the announcement on television that the borders would open,” Merkel told reporters, according to reports in foreign dailies including Le Figaro, The Guardian and the New York Times. “But it was Thursday, and Thursday was my sauna day so that’s where I went.”

After her steam bath, Merkel went for a beer with a friend and only afterwards, when they left the bar, did they find themselves swept up in the huge crowds thronging Bornholmerstrasse and pouring into the West.

There she met celebrating West Berliners and shared beers with them, before heading home, telling herself “the Wall will still be open in the morning.”

The next day, Merkel and her sister made a pilgrimage to the huge KaDeWe department store in the West, a temple of the western consumer society that had everything that was lacking in the East’s command economy.

Merkel, a pastor’s daughter, said she did not consider herself an “activist” against the communist regime, and had stayed out of politics until the Wall fell even if “since childhood I had had a critical view of the system.”

In 1990, after the two Germany reunited, Merkel joined the centre-right Christian Democrats and won a parliamentary seat in the East, starting a journey that would eventually see her elected as the first female chancellor.

She conceded, however, that not everyone had adapted so well.

“In the GDR we had known the pressure of Nazism, then communism. You can’t make that disappear with one blow. For many people it was impossible to learn something else in just one night,” she said.

She recalled the strangeness of tasting Parmesan cheese from Italy for the first time and the fascination many in the East felt for tropical fruits, but also the arrogance of many westerners.

“I was shocked when (West German politician) Otto Schilly mocked us, saying we were coming to the West to find bananas. You can still see that arrogance in the West today,” she said, adding her roots has sometimes held her back.

“When I suffered a setback, I often thought it was because I had come from the East, but I never wanted to let myself use that as an excuse.”

Many German voters have come to appreciate Merkel’s modest and unshowy style, some of which can be traced back to the discretion she learned growing up in a dictatorship, surrounded by prying eyes.

“We would get gift parcels from the West,” she recalled. “But in the GDR there were only five models of gloves. If you had a different pair, people knew where they came from. You’d be noticed, and that was bad.”