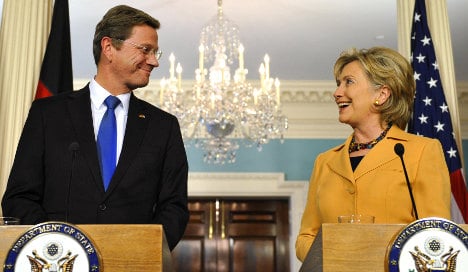 Clinton and Westerwelle at a US press conference on Thursday. Photo: DPA

In greeting new German Foreign Minister Guido Westerwelle in Washington, Clinton said she would “travel to Berlin and participate in the very exciting and important commemoration of the fall of the Berlin Wall.”

In Berlin, the US embassy said Clinton was due to give a speech Sunday at the Atlantic Council.

Around 100,000 revellers are expected to join the official Berlin Wall celebrations on Monday, with Chancellor Angela Merkel due to host a gathering of world leaders past and present, including Clinton.

“For Americans, our relationship with Germany is rooted in our commitment to freedom and democracy. And certainly, the new government that the minister represents exemplifies that,” Clinton said.

“This time is a reminder of the values that we share and that we will use to chart a new future together: democracy, tolerance, human rights, the pursuit of a peaceful and prosperous future for our people and for all people,” she said.

She praised Germany’s troop deployments in Afghanistan, its economic, education and health aid to Pakistan as well as its role in multilateral efforts to curb Iran’s nuclear ambitions.

Clinton, along with Trade Representative Ron Kirk, will then attend the Asia-Pacific Economic Cooperation (APEC) ministerial meeting in the following days.

The ministerial meeting is scheduled for November 11-12, ahead of the APEC summit, at which President Barack Obama will make his inaugural appearance. APEC finance ministers will also hold meetings that week.

Kurt Tong, the State Department’s point man on APEC, said Tuesday the various APEC meetings, including those attended by Clinton, will focus on “economic recovery” following the massive global slowdown.

The participants will also discuss the theme of “resisting protectionism,” a major topic of the summit in the September G20 summit of Pittsburgh as well as regional economic integration, Tong said.

He added they will also seek to “reinforce the G20’s pledge to establish a pattern of global growth that is more balanced by region and less prone to destabilizing booms and busts.”