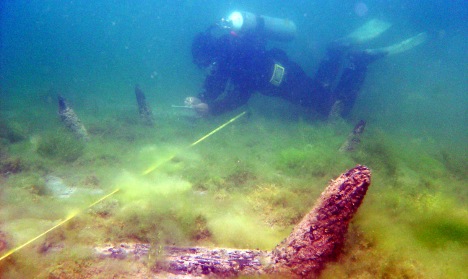 A ice skater reported the shallow wreck off the lake’s Reichenau Island in the winter of 2006 and subsequent dives and carbon testing by archaeologists revealed it was from the 14th century.

“We believe it could be the oldest shipwreck ever found in the lake,” spokesperson for the Stuttgart regional commission Dr. Peter Zaar told The Local. “There is one other boat we know is also from the 14th century, but we need more testing to know for sure.”

After the first dive in early 2006, it was clear that there was limited time to document and save the boat from environmental dangers, he said.

“We were afraid it would be damaged by boat traffic,” Zaar said.

Archaeologists were also worried that decreasing winter water levels and ice flow on Lake Constance, called the Bodensee in German, could destroy the nine-metre wooden boat.

“To beat a total loss the archaeologists have decided now on rescue measures,” a statement from the Stuttgart regional commission explained.

Thursday marked the end of a four-day diving operation to recover the exposed parts of the boat, which will now be taken to a Hemmenhof laboratory where specialist Dr. Dietrich Hakelberg from the Seemuseum Kreuzlingen will lead examinations. Afterwards the ship will be returned to a deeper resting place at the lake floor near Reichenau Island where it will be best preserved, Zaar said.

Experts know that Lake Constance has been used for trade and transport since the Stone Age. Monks at the Reichenau Abbey on the island are known to have had an interest in water traffic on the lake, using it for fishing and trade.

“This find is a sensation, particularly because it’s so close to the shore that lines the island, which is a UNESCO World Heritage Site because of the abbey,” Zaar said.

The recovery project is part of an EU sponsored “Interegg IV” programme to preserve historic elements from erosion at Lake Constance and Lake Zurich.