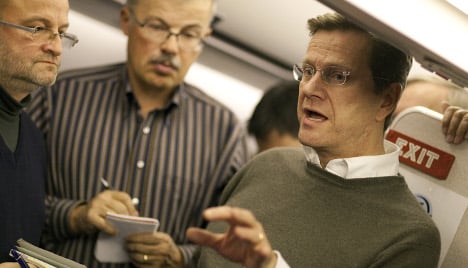 Westerwelle, who is still in the first weeks of his new job, described the United States as the “most important partner to Germany outside of Europe.” He also said he hopes to express “what important meaning the government attaches to the German-American relationship.”

In addition to meeting with Secretary of State Clinton, Westerwelle is also scheduled to visit a list of influential US senators.

The German foreign minister has said he aims to bring up the question of removing remaining US nuclear weapons from Germany. Some 20 warheads are thought to be located in the state of Rhineland-Palatinate, though the numbers have not been officially confirmed.

Westerwelle’s visit follows close on the heels of a US trip by Chancellor Angela Merkel early in the week, where she gave a historic address to a joint session of US Congress. She also meet US President Barack Obama for talks at the White House.

He is expected back in Berlin on Friday.