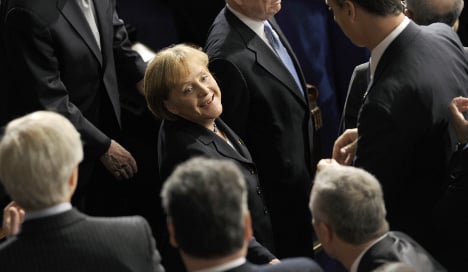 Merkel, freshly re-elected to a second term in September, used the opportunity to highlight the successes of German-American friendship and extol the virtues of defending freedom ahead of the 20th anniversary of the fall of the Berlin Wall. But she also drew attention to politically sensitive issues, such as environmental policy and the war in Afghanistan.

“With this speech, the German chancellor has proved that her generation should not be underestimated,” it said. “Symbols of the renewed German-American friendship are no longer the soldiers standing at Checkpoint Charlie, but online bloggers, iPhone users, the transatlantic mourners of Michael Jackson, politicians like Barack Obama, and now Angela Merkel.”

The importance of symbolism was also highlighted by the centre-left Süddeutsche Zeitung. “Merkel’s speech in Washington urged Western values and solidarity with our allies. The metaphor of today’s walls (between rich and poor, lavish lifestyles and scorched earth) accurately describes the challenges of tomorrow,” wrote the paper.

Right-wing daily Die Welt noted that “Americans can be very sentimental” and praised Merkel for explicitly thanking Democratic President John F. Kennedy, Republican President Ronald Reagan and the American pilots who participated in the Berlin Airlift. “It is good for Germany to have a Chancellor speak before Congress and celebrate a success,” the paper concluded.

But contemporary problems, such as global warming and the war in Afghanistan, may strain German-American relations in the future, wrote centrist daily Der Tagesspiegel.

Chancellor Merkel “used this auspicious moment to remind Congress of the positive aspects of the German-American alliance. This is important since governments in Washington and Berlin are in disagreement over a number of critical issues. In the White House, Barack Obama and Angela Merkel discussed climate change, war in Afghanistan and the world economy – issues that do not call to mind harmonious memories, but rather tangible conflicts of interest,” wrote the paper.

In an editorial titled, “An Ode to Freedom,” the conservative Frankfurter Allgemeine Zeitung said that “Frau Merkel did more than simply outline the foreign policy programme of a second-term chancellor.” According to the paper, Merkel has made it clear that the NATO mission in Afghanistan is a cornerstone of German security policy.

“One who offers such an ode to freedom before the Congress in Washington, cannot offer anything less to those in the Bundestag and the German public,” the paper said.

Meanwhile left-wing paper Die Tageszeitung called the speech a “chance for niceties,” and a “new beginning,” during which Merkel highlighted only the positive aspects of the German-American relationship. This is important “because right now there are serious differences of opinion between the governments in Washington and Berlin.”