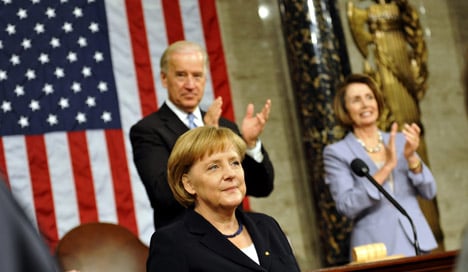 “I’m convinced, just as we found the strength in the 20th century to bring about the fall of a wall made of concrete and barbed wire, we shall now show that necessary strength to overcome the walls of the 21st century,” Merkel said.

She said those were “walls in our minds, walls of short-sighted self-interest, walls between the present and the future.”

In a rare address to a joint session of Congress just ahead of the 20th anniversary of the fall of the Berlin Wall, Merkel said next month’s high-stakes climate summit in Copenhagen hinged on strong US and European commitments.

“No doubt about it, in December, the world will look to us, to the Europeans and to the Americans,” she said.

Merkel also thanked Americans for their support as the Berlin Wall fell 20 years ago, telling the US lawmakers that Germany would never forget the country’s help.

“I know, we Germans know, how much we owe to you our American friends. And we shall never, I personally shall never, ever forget this,” said Merkel, who herself grew up in communist East Germany.

Merkel said Europe and America were united by common bonds of history and shared values.

Calling her chance to speak before a joint session of the US legislature an “honour,” Merkel touched on several pressing international issues including global warming, Afghanistan and Iran’s controversial nuclear ambitions.

“A nuclear bomb in the hands of an Iranian president who denies the Holocaust, threatens Israel and denies Israel the right to exist is unacceptable,” she said.

Merkel is only the second German chancellor to address the US legislature, after West German leader Konrad Adenauer spoke to separate sessions of each chamber in 1957.

Earlier on Tuesday, Merkel met with US President Barack Obama at the White House, where he hailed Germany as a strong ally on Tuesday and paid tribute to Merkel’s leadership.

“The alliance between the United States and Germany has been an extraordinary pillar of the transatlantic relationship,” Obama said, seated beside Merkel in the Oval Office.

He also praised Merkel for being at the vanguard of efforts to combat climate change. Obama said thanks to Berlin’s commitment, countries around the world are “beginning to recognise why it is so important that we work in common in order to stem the potential catastrophe that could result if we continue to see global warming go unabated.”

Obama also noted that Germany has been a staunch supporter of US military efforts in Afghanistan.

“We appreciate the sacrifices of German soldiers in Afghanistan, and our common work there to bring peace and stability to Afghanistan and to create the environment in which the Afghan people themselves can provide for their own security,” he said.

Merkel’s first US trip since winning a second term in September focused on the future of transatlantic ties, but also the demise of European communism, two decades after the fall of the Berlin Wall.

Merkel said she had always been inspired by the American Dream despite growing up behind the Iron Curtain.

“For me it was the land of unattainable promise,” she said.

Obama said the German leader “understands what it’s like to be under the shadow of a dictatorial regime, and to see how freedom has bloomed in Germany, how it has become the centrepiece for an extraordinarily strong European Union.”