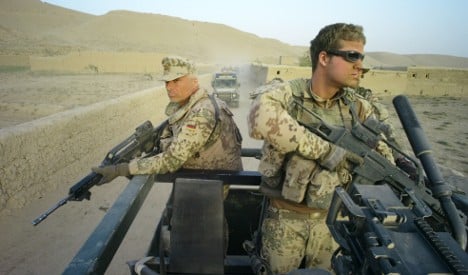 “Our engagement in Afghanistan has for years been a combat operation. But the feeling is – and not just among our troops – that the Taliban is waging a war against the soldiers of the international community,” Guttenberg told daily newspaper Bild.

Guttenberg, who was sworn in last week as Germany’s new defence minister following a general election in September, recalled that the law defines a war only as a conflict between two nations. But he also admitted the conflict in the strife-ridden country defied easy description.

“Certain traditional choices of words do not really work in the current situation. In parts of Afghanistan, there are, without question, conditions that are like a war,” he said.

“I can understand any soldier who says, ‘There is a war in Afghanistan. It doesn’t matter if it is foreign forces or Taliban terrorists who are attacking, wounding and killing me’.”

Germany, whose troops levels in Afghanistan he said had risen to more than 4,300 soldiers, will not shirk from its responsibilities in the country, the minister vowed.

“One day, the Afghans will have to be able to provide for their own security. Then our military task will have been accomplished,” he said.

Guttenberg’s new choice of wording was welcomed by the association representing the interests of Bundeswehr soldiers.

The group’s head, Ulrich Kirsch, told the Leipziger Volkszeitung that recognising the conflict in Afghanistan was a “war” showed Guttenberg was “measuring the pulse of the troops.”

“Soldiers facing combat each day in Kunduz, experiencing death and injury, and being forced to kill consider this situation to be war,” he told the paper.