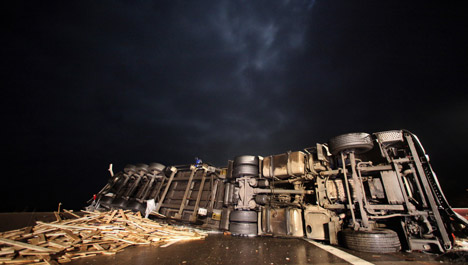 According to the police, the van from Frankfurt was driving in the right lane when it was rammed from behind while being overtaken by the 40-tonne truck. The Red Cross vehicle, carrying three men and one woman, was knocked over before the truck also lost control and flipped over across the motorway.

All four people riding in the blood donor van and the two truckers from Lithuania suffered serious injuries. Four others were injured slightly in a separate accidents caused by the first one.

The police believe the two men from Lithuania, aged 58 and 61, were under the influence of alcohol at the time of the accident.

The stretch of the A5 was closed for several hours overnight before reopening around 6 am on Tuesday.