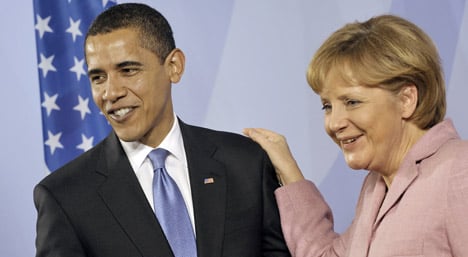 A file photo of Barack and Angie in April. Photo: DPA

Merkel was scheduled for talks with President Barack Obama before heading up to the US Capitol to deliver her speech.

In her first US trip since winning a second term in September, the German leader was expected to speak on the future of transatlantic ties and the demise of European communism days before Berlin marks the 20th anniversary with November 9 festivities.

She has called the invitation a “great honour” and said in her weekly podcast that she would use the occasion to thank the United States for backing German unification in 1990 – 11 months after the Wall’s fall – with “great enthusiasm and fondness.”

Merkel, who grew up in communist East Germany, will be only the second German chancellor to address the US legislature, after West Germany’s Konrad Adenauer spoke to separate sessions of each chamber in 1957. But beyond the pomp and expressions of goodwill, Merkel will be confronting a series of tough issues of strategic importance.

Among topics expected to be discussed are Afghanistan, Iran, standards for financial market regulation and climate change, her spokesman Ulrich Wilhelm said.

But some German commentators have said Merkel would be naive to think the honour did not come at a price. In particular, Obama might ask Germany to do more to help out in Afghanistan.

With around 4,400 soldiers deployed there, Germany is currently the third-largest supplier of foreign troops in the war-ravaged country after the United States and Britain.

But Merkel, who leaned hard on Bush to make concessions on climate change, also aims to make headway ahead of the UN conference in Copenhagen in December, when 192 countries will work toward an accord on reducing greenhouse gas emissions.

“It is not yet clear whether Copenhagen will be a success but the European Union and Germany in particular will push for us to achieve ambitious, forward-looking political resolutions,” she said.

Obama’s talks with Merkel will precede an EU-US summit on Tuesday.

The chancellor is also seeking proof that the United States is serious about new market rules to head off future global financial crises.

“The international financial and economic crisis has not yet been surmounted and we have not yet ensured that such a crisis cannot repeat itself,” she said.

Jackson Janes, head of the American Institute for Contemporary German Studies in Washington, said “there is a lot of concern in Berlin that Washington will not be as rigorous in its pursuit of reforms and will return to old ways of oversight.”

Merkel’s new foreign minister, Guido Westerwelle, was due to come to Washington on Thursday for talks with US Secretary of State Hillary Clinton, sources said.