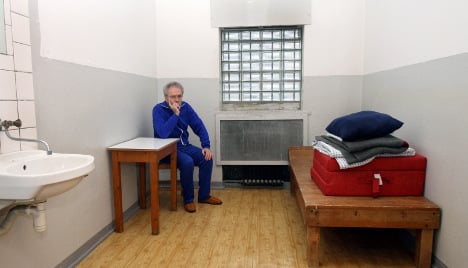 “Dear visitors, due to emotional stress caused by the jail situation, Carl-Wolfgang Holzapfel has been forced to break off the art performance 24/7 Stasi-Live-Imprisonment in spite of the great response,” the project website said.

The 65-year-old retiree began the project at the notorious Hohenschönhausen prison last Thursday in honour of the upcoming 20th anniversary of the fall of the Berlin Wall and the many political prisoners in East Germany who helped to bring down communism.

But on Saturday afternoon the live internet broadcast in cooperation with artist Franziska Vu proved to be too much for Holzapfel, who served 13 months of solitary confinement in the 1960s for challenging the German Democratic Republic’s (GDR) system.

“I no longer felt I was in a psychological position to continue this action,” Holzapfel said in a statement relayed by Vu.

According to workers at Hohenschönhausen, which is now a museum, many visitors had reacted negatively to the project.

Critics questioned Holzapfel’s former involvement in the far-right, anti-immigration party The Republicans (REP), in addition to his current membership with right-wing extremist organisation Witikobund, which supports the return of ethnic Germans to the Sudetenland.

Meanwhile former victims of the East German regime criticised Holzapfel for turning the prison museum into “Disneyland,” according to Berlin daily Der Tagesspiegel.