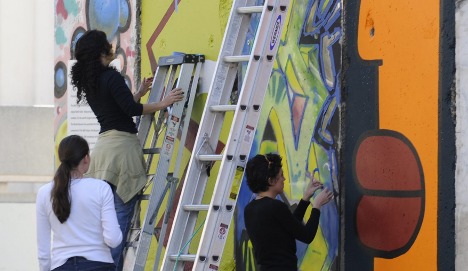 Since mid-October, 10 towering slabs of concrete that separated East and West Berlin until November 9 1989, have been installed along Wilshire Boulevard in front of Los Angeles County Museum of Art (LACMA).

The wall sections were acquired by the Los Angeles-based Wende Museum, a non-profit organization dedicated to acquiring, preserving and enabling access to Cold War-era artifacts from Eastern Europe.

The 2.6-tonne slabs have been made available to artists, who have been given free rein to make their own statements on each block of concrete.

“The Wall is a blank canvas,” said Wende Museum President Justinian Jampol. ”The Berlin Wall is such an international symbol. And it’s not even a wall any more. People have imposed their own ideas about what it means.”

Jampol said visitors to the wall exhibit had different interpretations of what it represented.

“You have people coming by, they don’t quite know whether they can touch it or not, if it’s historical, if it’s not, is it something we are allowed to

interface with or not,” he told AFP.

Artists who have been invited to use the wall as their canvas include Berlin-based Frenchman Thierry Noir, who was invited to help “maintain the memory” of the end of the Cold War.

Noir, a Berlin resident since 1982, has painted a large, stylized and lengthened facial profile composed of only three colours, a variation on an image he often painted on the wall in the years before its collapse.

The simplicity of the image’s design was rooted in practicality, Noir explained. Artists painting on the wall often had to work quickly in order to avoid the attention of East German border guards.

Noir recalled being harangued with the command: “Citizen of West Berlin, return immediately to your zone.”

“But in the last few months before the fall of the wall we got our revenge,” Noir said. “We were able to go through holes in the wall in some places and paint on the eastern side, which enraged the soldiers because they’d been told they could no longer shoot on sight.”

“LA has a horrible freeway system that kind of cuts through everything and make it possible to avoid certain neighbourhoods if you want to,” Karapetian said. “It’s kind of a class wall.”

The Wende Museum’s “Wall Project” will culminate at midnight on November 8, when a graffiti-strewn replica of the Berlin Wall will be erected across Wilshire Boulevard, one of the city’s main east-west transport routes, before being symbolically toppled.