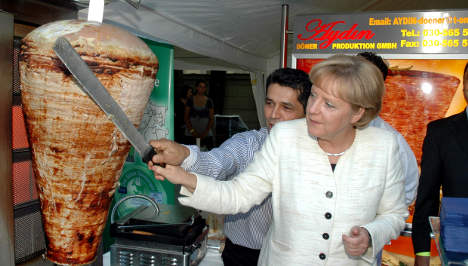 The photo in question. Photo:DPA

The restaurant owner has told Russian newspapers he was given the idea by an advertising company. “We actually have had more guests,” he told the Kosomolskaya Pravda newspaper.

“Everyone wants to know whether Merkel was really here to eat. No one has made an official complaint.”

The photo is currently being used on the Odessa restaurant’s internet site, but Ukrainian law reportedly bans the use of such photos without the permission of the person pictured.

The advertising agency said there was no abuse of the photo, explaining that it does not actually state that the woman in the picture is Merkel. It could simply be a woman who looks like Merkel – the point to be made is that it shows a serious woman making a sensible decision to eat healthily.

It seems the picture was taken in June this year at a Christian Democratic Union party in Berlin which included a döner kebab stand.

An employee of the company told German media, “We have been invited there for the last three years, and have been able to offer our product to the guests. Ms Merkel sliced the döner and ate a little piece. She later came back – obviously she liked it.”