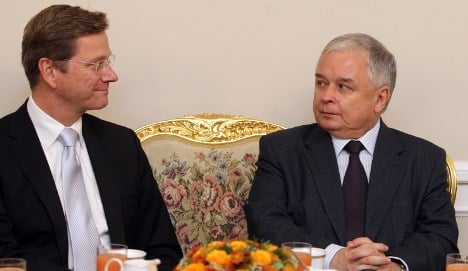 He met his Polish counterpart Radoslav Sikorski and president Lech Kaczynski on Saturday, in a performance which was largely rated as confident by observers in Warsaw.

Westerwelle garnered praise from the local press by expressing doubts about the potential involvement of Erika Steinbach, the head of the organisation of Germans thrown out of Poland after World War II, in a memorial for them.

She is a controversial figure in Germany and Poland for championing Germans who died after being expelled from Poland and forced to walk to Germany in hideous conditions.

Westerwelle concentrated on celebrating and cementing the good relations between the two countries. He said it was no accident that he had chosen Warsaw for his first visit as foreign minister.

But in order to halt murmurings of discontent from France at not being chosen, he talked of reviving the pre-war traditional alliance between Germany, Poland and France.

Kaczynksi took Westerwelle on a tour through the presidential palace, including the spot where in 1989 talks took place between the communist regime and the democratic opposition.

Although Kaczynski has often warned against Germany becoming too powerful within Europe, the visit seemed to be a relatively friendly one.

It is not known whether Westerwelle, who is open about his homosexuality, brought up the subject of the homophobic atmosphere in much of Poland – nor or Kaczynski’s banning of gay pride marches in Warsaw when he was the capital’s mayor.

Westerwelle is due in Paris and The Hague on Monday, and is also expected to take a trip to the US soon.