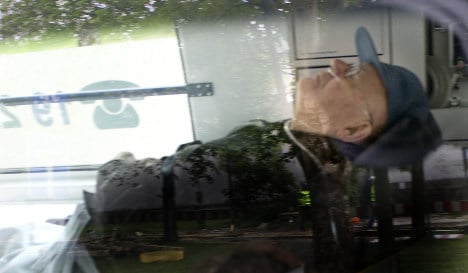 Demjanjuk was brought to Munich in May. Photo:DPA

The 88-year-old man, named only as Samuel K., is “suspected of having been accessory to the cruel murder of at least 434,000 people,” according to Der Spiegel magazine, quoting the Central Office of State Justice Administration for the Clarification of National Socialist Crimes in Ludwigsburg.

K. has a similar war history to that of Demjanjuk, but has never faced justice. Like Demjanjuk, he was recruited by the SS into the Trawnikis as a helper for the mass murder in Eastern Europe.

He worked as a guard at the Belzec extermination camp, according to the report, and held a higher rank than Demjanjuk.

He has been questioned by German authorities a number of times since 1969, and was even interviewed by Bavarian criminal investigators in June this year.

“It was clear to all of us that the Jews were being exterminated there, and later also burned,” he told them of his time in Belzec.

The investigation into K. is still in its preliminary stages, the magazine said.

Demjanjuk’s trial starts on November 30 in Munich. He is charged with 27,900 counts of accessory to murder for his part in the gassing of prisoners taken at the Sobibor camp in occupied Poland.

The trial is likely to command global attention, and around 20 of the 35 people have filed ancillary suits for close relatives killed in the camp are expected to attend.

Cornelius Nestler, a law professor in Cologne representing around 30 of the relatives, said the trial was revolutionary in that it would not only focus on what the accused had done.

“Here it is about the extermination machinery in which Demjanjuk had a function,” he said.

Demjanjuk becoming a Trawniki is understandable, as he wanted to save himself, said Nestler.

“His staying in Sobibor no longer had anything to do with rescue. While all around him in Eastern Europe the dangers of war threatened, the life in Sobibor was pleasant for the Trawniki – at the price of taking part in the continuing murder of thousands of Jews.”