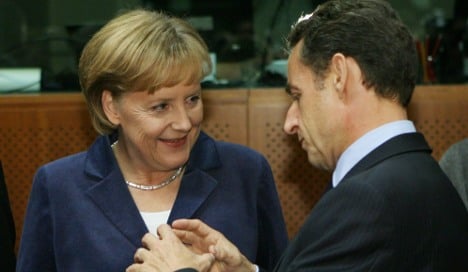 The French head of state said he and German Chancellor Angela Merkel had agreed to back “the same candidate,” adding that the pair shared the same “vision” for two new top jobs to be created under the Lisbon Treaty, and their favoured runners.

Confirmation that Berlin and Paris were collaborating on arguably the biggest appointment in the bloc’s history came in the wake of British Prime Minister Gordon Brown campaigning personally on behalf of Blair.

And relations with the UK were further dented by an open attempt by Britain’s potential new leader to get the Czech president to delay ratifying the Lisbon Treaty – something Vaclav Klaus has just been persuaded not to do.

David Cameron, leader of the British Conservative Party, and widely tipped to oust Brown at the next general election, wrote a letter to Klaus spelling out his party’s plan to hold a referendum on the treaty should they enter government.

The British The Guardian newspaper reported that Sarkozy was incensed by the intervention, while Merkel was concerned by behaviour she considered untrustworthy.

The letter also seems to have been poorly timed, as Klaus, having secured his country’s exemption from a rights charter, to sign the treaty.

“I do not plan to impose any extra conditions,” Klaus said in a statement.

This opens the way to presidential nominations.

Sarkozy, who said Lisbon could now enter force as early as December 1, would not reveal the identity of his and Merkel’s preferred choice, but said Europe’s George Washington, in reference to the founding US father, would need to be both “charismatic” and a “consensus-builder.”

Without naming Blair, Sarkozy hinted at longstanding problems with a mooted but never declared candidacy.

“The names in the first wave are not necessarily the winners in the end,” he said.

Ironically, Sarkozy had been the first to suggest Blair as a contender – although he backtracked a couple of weeks ago citing a “problem” over a lack of British engagement with core EU policies.

Ignoring Brown’s stated wish for Blair to take the president’s job, Europe’s socialists are instead targeting the foreign policy position.

And in an intriguing British twist, Brown’s Foreign Secretary, David Miliband, could become the most popular candidate.

While Miliband has ruled himself out running for the second job, recent remarks he made, suggesting Europe should play a bigger global role, have been interpreted as a sign that the position appeals to him.

Dutch leader Jan Peter Balkenende is not officially a candidate, but on Friday suggested that this could change.

Former Latvian head of state Vaira Vike-Freiberga, who would satisfy a lobby favouring a woman, and ex-Irish leader John Bruton are also declared runners, albeit with longer odds.

But the other name in the ring, Juncker, was said by one diplomat to have launched the political equivalent of a “suicide pact” by going up against Blair.

All eyes therefore, rest on Merkel.