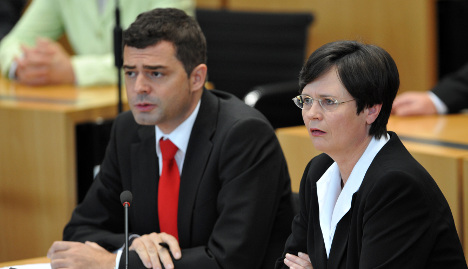 During the first two votes, the 51-year-old was punished by CDU and Social Democratic (SPD) members expressing their disapproval for the coalition agreement between the two parties. She lost by just one vote both times.

But after two failed votes on Friday, Lieberknecht was only saved by the socialist Left party’s designated state chief Bodo Ramelow, who made a surprise announcement that he would run against her for a third round. His announcement effectively forced the dissenters to choose Lieberknecht.

Of the 87 votes, Lieberknecht received 55 votes, and Ramelow 27.

Lieberknecht is now the CDU’s first female state premier, and the second woman to take such a position in Germany’s history.

“We’ve seen it here. Nothing is certain, and one needs to always be prepared for everything,” she said after the vote.

The battle for the premier post had been the biggest stumbling block to a left-wing coalition in Thuringia, as SPD’s state leader Christoph Matschie had refused to accept anyone from The Left even though the socialists won more votes than the SPD.