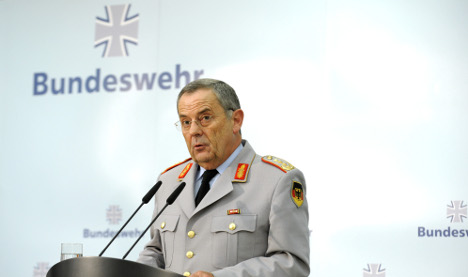 “In light of the results of the report, I have no reason to doubt that German soldiers acted in the correct military fashion, given their mandate from the United Nations and the difficult operational situation,” General Wolfgang Schneiderhan, general inspector of the army, said in a speech in Berlin.

The report focused on an air strike called by Bundeswehr Colonel Georg Klein on September 4 in order to destroy two fuel trucks taken by the Taliban in the northern Afghan region near Kunduz.

Berlin at first contended that only Islamist insurgents had been killed in the bombardment, but later had to admit there had been an unspecified number of civilian victims. Klein was then accused of violating NATO’s rules of engagement in calling the strike.

A NATO spokesman confirmed that the report had been delivered to Berlin but said he was not aware of its contents.

“I do not know what it contains and I absolutely do not know if anyone intends to make it public,” James Appathurai told AFP.

Schneiderhan said the exact death toll in the attack could no longer be determined, adding that the report cited a range of between 17 and 142 casualties. He added that the contents of the report were secret and that he could not release further details.

However, he said the report “does not confirm that innocent people were killed in the air strike.”

The bombing targeted two fuel tankers that German forces said were hijacked by Taliban and represented a danger to them. However, accounts of several civilian casualties prompted critical reactions even from Germany’s own NATO allies.