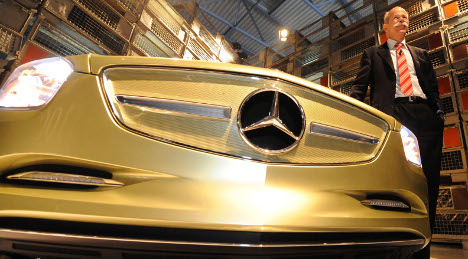 the last three months of the year.

“Over recent months we have increasingly overcome the crisis,” Daimler boss Dieter Zetsche said in a statement. “Daimler was able to maintain its financial flexibility, intensify measures to improve efficiency and simultaneously drive the development of new products and markets.”

“After returning to profitability in the third quarter of 2009, Daimler anticipates positive EBIT from its ongoing business also in the fourth quarter,” the statement said.

A total of 386,461 vehicles were delivered in the third quarter, a year-on-year decrease of 26 percent, with a particularly sharp drop of 46 percent in the number of heavy trucks sold. Compared with the previous quarter however, the overall fall in the number of vehicles sold was limited to just one percent.

The company released provisional figures last week that were better than expected by analysts, including a return by Mercedes Benz to profit. Mercedes’ results should improve slightly again in the fourth quarter, the company said on Tuesday.

It has also decided to increase the size of a cost-cutting plan that was initially set at €4 billion, without providing details.

For the full year, Daimler “anticipates significant decreases in unit sales and revenue,” the statement said.

Looking ahead, 2010 “will remain challenging due to the still-difficult situation of automobile markets worldwide,” it added.

Daimler stressed however that it “has a sound financial position, which should remain stable also during the fourth quarter.”

It intended to go to capital markets “only to a slight extent during the rest of this year” in a bid to alleviate concern over the group’s financial footing.

Daimler shares showed a loss of 1.06 percent to €35.45 in midday trading, while Frankfurt’s DAX index of leading shares was 0.32 percent higher overall.