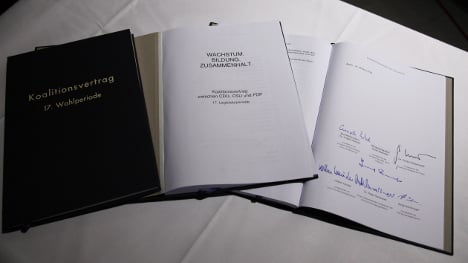 Carsten Kühl, finance minister for the state of Rhineland-Palatinate, rejected the plans entirely.

“What the black-yellow coalition has planned will break the states and budgets in a year,” he said, referring to the party colours of Chancellor Angela Merkel’s conservative Christian Democrats (CDU) and the pro-business Free Democrats (FDP).

Kühl added that his state had already lost some €500 million from previous measures and stands to lose another €700 million now.

“It’s being brutally reallocated – at the cost of the socially disadvantaged and the states,” Kühl added.

Under plans for the next four years, sealed on Monday evening in the coalition agreement between the conservatives and the FDP, the tax burden on families and workers will be eased by some €24 billion.

Merkel believes the tax breaks will speed up Germany’s recovery from its worst recession since World War II, and that the economic growth that the cuts will trigger will help cover the cost.

But Peter Jacoby, finance minister for the already heavily indebted state of Saarland, said the cuts could lead to “grave revenue deficiencies.”

And head of the CDU in Thuringia and the state’s designated new premier Christine Lieberknecht threatened to revolt against the tax cuts.

“If the tax plans have a demonstrably negative affect on the state budget, we won’t agree to them,” she said.

Meanwhile Schleswig-Holstein, which also just elected a CDU-FDP coalition government, remained relatively silent on the issue, despite being deep in debt.