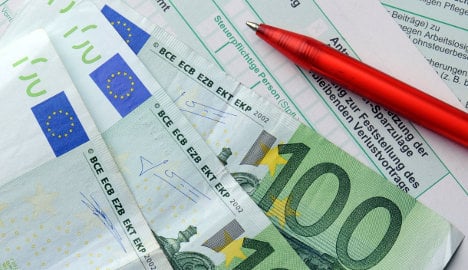 Under plans for the next four years, finalised on Friday by Merkel’s conservatives and her new pro-business partners, the tax burden on families and workers will be eased by some €24 billion.

Merkel believes the tax breaks will speed up Germany’s recovery from its worst recession since World War II, and that the economic growth that the cuts will trigger will help cover the cost.

But despite Germany’s mammoth and growing debt mountain, the new government has yet to detail any major cuts in spending while Germany’s nascent economic recovery remains fragile.

“We are focusing on growth, because growth is the way out of the crisis,” Merkel said on Monday.

Merkel’s conservative Christian Democrats and their Bavarian sister party the Christian Social Union, were due to rubber-stamp the plans at party meetings on Monday. Their pro-business Free Democrat partners did so on Sunday.

Merkel, 55, Germany’s first chancellor from the former communist East and its first female leader, won a second term in general elections on September 27. She was due to be re-elected formally by MPs on Wednesday.

Andreas Rees, an economist at Unicredit bank, agreed: “It does not make sense to cut public spending already next year when unemployment is expected to soar by at least 500,000.”

Such a policy “would literally have been Russian roulette with possibly devastating effects on growth and employment,” Rees said.

But it is far from certain that what is essentially a gamble will work.

“For the moment, the new government is going with tax cuts for families and employees. It is unclear when it will be firms’ turn,” Klaus Zimmermann, head of the economic institute DIW, told the Berliner Zeitung daily.

“If you are looking for families to boost consumption then one has to ask oneself whether families will actually spend more or whether they will save most of the money,” Zimmermann said.

The tax cuts, as well as increases in spending because of the recession, will also serve to add to Germany’s huge debt mountain, even if they succeed in sparking growth.

“If Germany wants to reduce its public debt level to 60 percent (of output) by 2020… the economy has to grow by 4.5 percent on average each year,” Unicredit’s Rees said. “It goes without saying that this is a mission impossible.”

Germany’s national debt currently stands at around €1.5 trillion, and growing, with the interest payments alone costing the country tens of billions of euros every year.