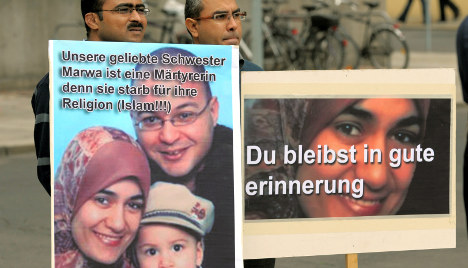 On the first day of the trial of Russian-born German defendant Alex Wiens in the eastern city of Dresden amid tight security, the victim’s husband Elwy Okaz gave wrenching testimony in the same courthouse where his wife was killed.

Some 200 police officers were on hand after reported Internet death threats against the accused, who appeared in court behind bulletproof glass.

Okaz said Wiens plunged an 18-centimetre kitchen knife repeatedly into the veiled Marwa al-Sherbini, 31, who was three-months pregnant at the time with their second child.

When Okaz tried to come to his wife’s aid, he too was stabbed several times.

Sherbini had just testified against Wiens at a defamation trial for calling her a “terrorist”, an “Islamist” and a “whore” in a playground dispute. She bled to death at the scene in front of her son Mustafa, then three-and-a-half.

Describing the events of July 1, Okaz said neither he or his wife had any sense they were in danger.

“The perpetrator suddenly attacked my wife. He hit her several times and when I tried to help he hit me too. It was only then that I noticed he had a knife and that he had stabbed her,” Okaz, a 32-year-old geneticist, told the hushed courtroom. “Then he began stabbing me too.”

Prosecutor Frank Heinrich said the attack was driven by racism.

“He stabbed them out of pure hatred of non-Europeans and Muslims. He wanted to annihilate them,” he told the court, where many, including Okaz, were wearing pins with a picture of Sherbini’s beaming face.

Wiens, 28, followed the testimony with his head in his hands and covered by a hood, his eyes hidden behind sunglasses despite a 50-euro (75-dollar) fine imposed by presiding judge Birgit Wiegand when he refused to remove them. He declined to address the court.

The attack, and a slow reaction by the German media and political class, sparked accusations of neglectful handling of hate crimes against Muslims.

The case triggered anti-German protests in Egypt and Iran and sparked fears of an escalation on the scale of the bloody riots touched off by the publication in Europe of caricatures of Prophet Mohammed in 2005.

Berlin moved to deflect criticism, with Chancellor Angela Merkel expressing her condolences to Egyptian President Hosni Mubarak on the sidelines of the Group of Eight summit. Thousands rallied in Dresden in Sherbini’s memory.

The Egyptian government demanded the maximum sentence under German law for Wiens, which is life in prison — the penalty prosecutors are seeking.

Asked what Egyptians hoped would emerge from the trial, Cairo’s ambassador to Germany, Ramzy Ezzeldin Ramzy, told reporters at the courthouse: “This was a heinous crime and they are expecting justice to be administered in a swift way.”

Prosecutors say Wiens had smuggled the knife into the courtroom and stabbed Sherbini at least 16 times within three minutes in the chest, back and arm, and Okaz roughly the same number of times.

Okaz was then shot in the leg by a confused guard who apparently took him for the attacker.

He entered the courtroom Monday on crutches and said doctors are unsure if he will ever walk normally again. Their son now lives in Egypt with Okaz’s family.

“He misses his mother,” Okaz said. “He is suffering too.”

Sherbini and Wiens met in August 2008, when she asked him to clear a playground swing where he sat smoking a cigarette so Mustafa could use it. He refused and launched into an anti-Islamic tirade.

She pressed charges for defamation and he was fined €780. An appeal of the conviction brought them together again in July, when she was killed.

Sherbini worked as a pharmacist while her husband was pursuing his doctorate in Dresden. He had moved to Germany in 2004 and was followed by his wife a year later.

The unemployed Wiens, who arrived in Germany from Perm in the Urals in 2003, reportedly struggled with bouts of depression.

A verdict is expected November 11.