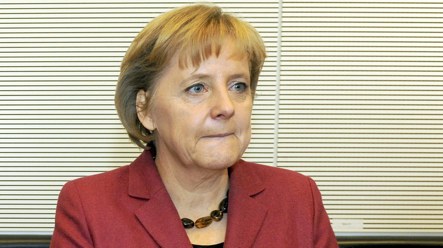 The conservative Merkel won re-election last month and dumped her partners, the Social Democrats, for the smaller, business-friendly Free Democrats, with whom she presented the coalition’s plans Saturday.

Their roadmap for the next four years in power, including €24 billion ($36 billion) in tax breaks, won some praise from business leaders for aiming to lift Europe’s biggest economy out of its deepest postwar slump.

But the media, which had broadly backed the 55-year-old Merkel for a second term, and leftist leaders poured scorn on the programme.

“After three weeks of coalition talks, there is no nicer way to put it: this start is a failure in terms of the issues, the personnel and the vision,” political reporter Christoph Schwennicke wrote in an online editorial for magazine Der Spiegel. He said Merkel’s new cabinet resembled a political “Jurassic Park” with policies to match.

“There is absolutely no sense of a new beginning…It is as if the figures from the bedrock of the Kohl age had risen again,” he said, referring to veteran chancellor Helmut Kohl, who last led a centre-right coalition up to 1998. His cabinet included a number of the same ministers in Merkel’s new team.

Critics also noted that apart from Merkel, the government has no minister from the former communist east, in a year marking the 20th anniversary of the fall of the Berlin Wall.

Although Merkel’s Christian Union bloc has long touted fiscal discipline, designated finance minister Wolfgang Schäuble, a longtime Kohl lieutenant, acknowledged there was no hope for a balanced budget in the next four years.

“It is ambitious enough to maintain the debt limit in the constitution,” he told the Welt am Sonntag newspaper, referring to a federal debt ceiling of 0.35 percent of gross domestic product.

Asked whether it was utopian to expect a balanced federal budget, the 67-year-old Schäuble replied: “In this term, of course.”

“For the people of Germany, nothing will get better but a whole lot will be less secure and more expensive,” Steinmeier, who challenged Merkel in the general election, told the Bild am Sonntag newspaper.

The new government foresees major tax cuts from January 1 despite a mounting €1.5-trillion debt and no clear plans to finance the move apart from counting on improved economic performance.

The coalition also wants to reform Germany’s creaking health care system, with the details to be hammered out in committee. But it has said employer contributions will freeze, meaning employee premiums are almost sure to rise.

The head of the BDA employers’ association, Dieter Hundt, called the coalition manifesto “a good compass for the coming years”, praising tax relief for companies and the move to hold down labour costs.

But the president of the German Chambers of Commerce and Industry, Hans Heinrich Driftmann, said he had hoped for more “courage to reform” to create jobs and grapple with the problems posed by an ageing population.

On international relations, incoming Foreign Minister Guido Westerwelle, the FDP leader and an avowed transatlanticist, is calling for Germany to take up US President Barack Obama’s call for a world without nuclear weapons.

But he has said Berlin should start by demanding the removal of the estimated 10 to 20 US nuclear missiles on German soil – a stance that could raise a few questions when Merkel travels to Washington next month to deliver an address before both houses of Congress.

Environmentalists are also livid about more funding for genetic engineering and plans to scrap the 2000 decision to abandon nuclear power by around 2020. Greenpeace said the decision to extend the life of some reactors sent “a disastrous message”.