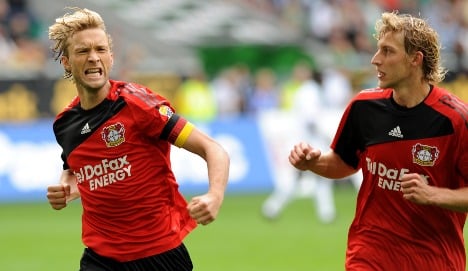 The 27-year-old midfielder aggravated a knee injury in the 1-0 win over Russia in Moscow on October 10 which booked Germany’s place at the 2010 World Cup and had a minor operation to fix the damage last Monday.

“It wasn’t a complete surprise that Simon is out, but it’s still a bitter blow,” admitted Heynckes with Rolfes now needing ten days rest. “But the player’s health definitely comes first so it was important to have the operation now. There are several options and I’ve got full confidence in these players.”

Leverkusen and second-placed Hamburg are the only two undefeated teams in the league, but Dortmund are showing signs of recovery after a rocky start to the season.

Wins away to Borussia Mönchengladbach and against VfL Bochum last Sunday have seen Jürgen Klopp’s side move up to tenth place in the league and midfielder Nuri Sahin issued a challenge to Dortmund’s rivals.

“We’ve got to put some results together and make up the points we gave away at the start of the season,” he said. “Leverkusen have got a good team. But if we can repeat the way we approached the Bochum game then we can beat anybody.”

Argentina striker Lucas Barrios has been brought to Dortmund to replace Swiss striker Alexander Frei and the 24-year-old striker had to wait 408 minutes for his first Bundesliga goal.

After getting off the mark at Mönchengladbach the second goal came along quickly against Bochum as he aims to score his third in three games against Leverkusen.

Third-placed Schalke 04 take on second-placed Hamburg on Sunday with the Hanseatic City side playing Glasgow Celtic in the Europa League on Thursday night.

Schalke’s defender Marcelo Bordon says his side must concentrate to pick up their fourth consecutive win after victories over Dortmund, Frankfurt and Stuttgart.

“The recent wins in the Bundesliga have put you in a good position going into the clash with the team in second place,” said the Brazilian. “This is down to our hard work and the effort we have put in in training. Against Hamburg we have to make sure we put in another good performance and keep the three points at home.”

Bayern Munich host Eintracht Frankfurt in the Bundesliga on Saturday and then travel to face the same opposition next Wednesday in the German Cup. The German giants are sixth in the table and are without French midfielder Franck Ribery, who is expected to be out for two months, although striker Luca Toni and captain Mark van Bommel are now back from injury.

Defending Bundesliga champions Wolfsburg are in the German capital on Sunday when they take on bottom club Hertha Berlin who are desperate to break their horrendous run of form with just one victory to their name all season.

The last time Hertha won was the opening day of the season when they humbled Hanover 1-0, but since then they have slid down the table and are five points adrift at the foot.