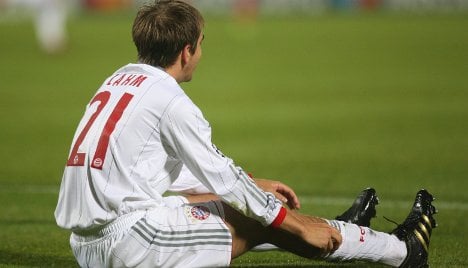 Bordeaux fought back from a catastrophic start and survived a nerve-wracking second half to go top of Group A. Bordeaux defender Michael Ciani opened the scoring, for Bayern, with an own goal in the fifth minute before making amends with an equaliser just before the half hour mark.

Marc Planus claimed Bordeaux’s second before the interval, however as Bayern striker Luca Toni missed a great late chance to equalise, the hosts went on to spectacularly miss two second half penalties.

Bayern coach Louis van Gaal, never one to hold back when displeased, vented to his feelings.

“The defeat has really angered me,” said the Dutch taskmaster, who won the trophy with Ajax in 1995.

“After the early goal we made too many poor passes. We were better in the second-half with 10 men than we were in the first-half with 11.”

Bayern came to the Chaban Delmas stadium without injured forwards Arjen Robben and Franck Ribery and in the hope that playmaker Thomas Müller could live up to his reputation as a future Bayern star.

Müller, however, was one of two Bayern players to be cautioned in the first half and the 20-year-old was sent off just after the half hour mark after a shocking tackle on Mathieu Chalme.

However as an ill-at-ease Bayern saw yellow cards going to Müller then Holger Badstuber, Laurent Blanc’s side dug in to lay the foundations for a well-deserved equaliser.

Marouane Chamakh saw his left-foot drive go wide of Hans-Jörg Butt’s post and a Wendel freekick from the right 10 minutes later forced the Bayern keeper into a crazy forearm save after he was duped by the bounce.

The hosts’ pressure paid off when they won a corner just before the half hour, and Ciani made amends in style by side-flicking the ball past Butt with his right heel.

Müller’s red card barely a minute later saw Bordeaux then move up a gear and Wendel rose well to meet a cross from the right only for his poor header to sail wide.

Yoann Gourcuff then took a pass from the other side of midfield, turned and unleashed a superb drive from 25 yards that a beaten Butt did well to tip over the crossbar.

Two minutes later Bordeaux went ahead after a pacy freekick from the right caused mayhem for Bayern’s defence. Planus claimed the goal although Hamit Altintop looked to have played a major role.

Van Gaal made no changes for the start of the second half but was given hope of an equaliser on several occasions as Bordeaux wasted the chance to seal the win.

On 52 minutes Chamakh was cautioned for simulation, and at the other end a deep cross almost caught out Carrosso as the keeper began to run out to collect the ball.

Miroslav Klose finally broke out of his slumber to challenge the hosts’ defence, but Planus did well to get back and block the shot.

Minutes later Chamakh won a dubious penalty for Bordeaux after a foul by Butt, but Gourcuff’s cheeky chip – telegraphed by the short run-up – was parried by the big keeper’s hand and kept out the net.

After Chamakh just failed to get on the end of a superb Wendel cross from the left, Toni, at the other end, missed a golden chance to equalise after his header at the back post had Carrosso beaten but bounced back off the upright.

In the closing 10 minutes Bordeaux had chances to score through Tremoulinas and Chamakh, and they were soon left regretting those misses.

In the 88th minute Chamakh won a more authentic penalty after being hauled down in the box by Daniel Van Buyten, who was sent off.

Once again, Butt came to the rescue to beat Jussie from the spot.

Blanc, despite ruing the two missed spot-kicks, said: “I thought beforehand we were going to play a big match, and we did. I’m very satisfied with my players, they showed their hunger in their mentality and in their attack.

“We saw a good Bordeaux this evening, the players gave everything and they respected what we said during the week – don’t forget the basics.”