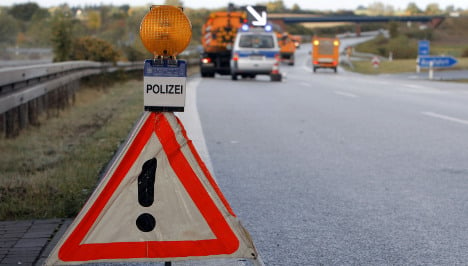 A file photo of a police clean up operation on an autobahn. Photo: DPA

The 64-year-old said he had travelled to Luxembourg with the intention of paying for a new vehicle. After he decided not to buy a car after all, he stopped at a petrol station in Wasserbillig, Luxembourg, on his way home. There he laid the money on the hood, forgot it, and drove away, he said.

Over the border on the German autobahn he noticed something hit his windscreen, though he didn’t realise it had been the money until he made another pit stop, the man told police.

Officers searched a stretch of the A64 motorway near the Sauertal bridge, where the man suspected he’d lost the money, and found €18,080 of the total sum stuck in bushes and foliage along the way.

In addition to the money, however, police found a receipt that indicated the man had just closed a bank account in Luxembourg. When officers confronted the man, he admitted that instead of going to buy a car he had wanted to transport the money across the border, raising suspicions of tax evasion.

The police have notified customs officials.