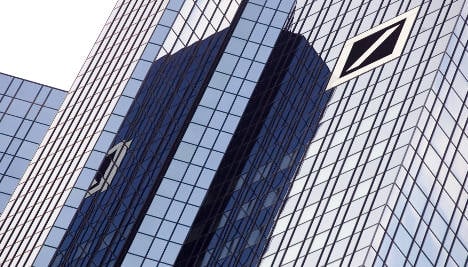 According to preliminary estimates released on Wednesday, Deutsche Bank’s net profit was €1.4 billion ($2.1 billion), up from €440 million in the same period a year ago.

Deutsche Bank, Germany’s largest bank, declined German state aid, taken up by number two Commerzbank and a raft of state-owned regional banks in the wake of Lehman Brothers’ bankruptcy, and is now poised to benefit from a recovery in the sector.

Its pre-tax profit climbed to €1.3 billion from just €93 million in the year-earlier period, but its bottom line was also boosted by tax reimbursements following audits of previous years’ results.

That disappointed investors who drove the bank’s share price down sharply in early Frankfurt trading.

Merck Finck analyst Konrad Becker told AFP those reimbursements could amount to as much as €500 million, but said profit taking was probably also behind the fall in Deutsche Bank shares.

The bank is to release full results on October 29, and some figures could change in the meantime, it said.

But the Frankfurt-based lender added that all its business segments posted “positive results,” and that its “tier one” capital ratio, a closely watched measure of its financial soundness, improved to 11.7 percent from 10.3 percent.

Just over a year after the failure of US investment banking giant Lehman Brothers drove the global financial system to the brink of collapse, sector bellwethers like Goldman Sachs and Citigroup also posted strong results last week.

Analysts nonetheless focused on the tax effects from which Deutsche Bank benefitted, with one telling Dow Jones Newswires that such one-off items were frustrating.

The pre-tax result was only slightly better than the €1.2 billion expected, he added.

“That cannot be tied to the figures,” Becker said, estimating that it might be the result of profit taking because the shares had recently been gaining in value.