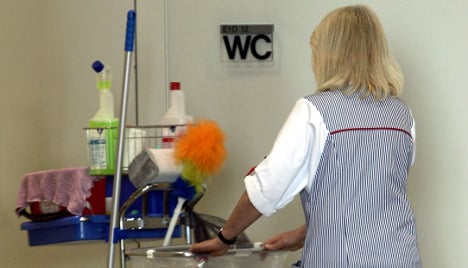 Cleaning workers at some 15 retirement homes, research labs, parliamentary buildings and other facilities did not show up for work in their bid to encourage employers to offer an 8.7 percent wage increase for 860,000 employees.

Some 200 people were expected at a demonstration near the city’s Technical University, regional union leader Rainer Knerler said, adding that six other facilities may also be hit by the strike.

The union said the strike was the beginning of an “indefinite labour dispute” in the branch.

“We have miserable work conditions. We have really held still in the last years,” IG BAU’s custodial worker leader Susanne Neumann told broadcaster ZDF. “The companies are getting increasingly cheeky – where covering 400 square metres in an hour is expected – and no person can manage that.”

Many cleaners end up using their free time to finish their jobs, she said.

Wage talks with employers began in January and broke down in August. In addition to a wage increase, IG BAU wants equal pay for workers in former East Germany, who still earn less.