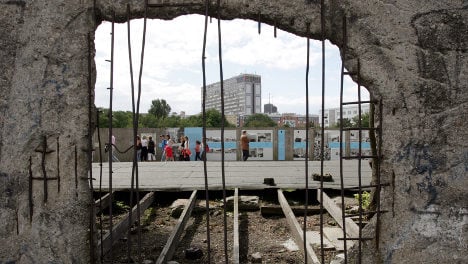 With so little of the actual Berlin Wall still standing in the German capital, shopping for a true piece of the Cold War relic is enough to trigger anyone’s kneejerk cynicism.

This is a scam too obvious to miss, surely. Who’s to say where these grey crumbs come from? The spray paint is not real, for a start. It’s an open secret in Berlin souvenir shops that the colour on most chunks of the Wall is added in Volker Pawlowski’s workshop. Located in the city’s northern district of Reinickendorf, this small firm supplies around 90 percent of the Wall pieces sold in Berlin.

Yet it does not bother him that the authenticity of his concrete fails to extend to the colourful graffiti on the souvenirs he hawks.

“The East Side Gallery isn’t real either, is it?” He says, referring to the kilometre-long stretch of Wall that has been preserved as an open-air art gallery. “That’s being re-painted too. It’s important that the concrete is from the Wall.”

Dubious though this comparison might be, in Pawlowski’s mind there is a clear line between history and aesthetics, and the success of his little painted Wall pieces relies on conferring both with equal value. People are more likely to buy pieces of the Berlin Wall if they’ve been coloured. For the discerning Wall-buyer, some of the pieces come with a small certificate of authenticity, rather misleadingly embossed with the seal of the communist German Democratic Republic.

Pawlowski, a West Berlin construction worker, had the idea of selling the Wall sometime in 1991. His entrepreneurial vigour was awakened by the hundreds of Wall-peddlers that populated the city in the early 1990’s.

“I’m the last fossil of those times,” Pawlowski mutters.

But instead of contenting himself with a street-corner stall, he toured various recycling plants, where most of the Wall had ended up after its removal. Eventually he bought around a hundred individual segments of the barrier, weighing 2.75 tonnes and rising 3.6 metres each. Though he now refuses to mention the price he paid for them, the going rate at the time ranged from between 1,000 and 2,000 German marks, (€500 and €1,000) per segment. Pawlowski will now let you have one of his for €3,900.

Not that his hunk of Wall is likely to run out soon – he still has around 40 segments left, easily enough to chip away and sell for the rest of his life. As holy relics go, the Berlin Wall offers a lot more raw material than, say, Christ’s cross. There were 184 kilometres (114 miles) of concrete, or 45,000 individual segments, and its commercial value was recognised early. Showing a notable capitalist instinct, ministers of the provisional GDR government passed a resolution to take commercial advantage of the Berlin Wall on December 29, 1989, before official demolition even began.

An East German foreign trade company, Limex-Bau, received the job of marketing the individual segments, which it apparently did with some success. Three-hundred-sixty segments were taken for their artistic value and sold all over the world for prices as high as 40,000 marks. There are segments in Las Vegas casinos, South Korean parks and on Caribbean islands. The city of Berlin has also kept a few dozen segments to give away as ceremonial state gifts.

Cashing in on the Iron Curtain

Until the official reunification of Germany on October 3, 1990, the profits from the Limex-Bau sales went into East Germany’s state treasury. This caused much anger in the East German population, and the funds were then distributed to public health services and historical preservation funds.

Official demolition of the Wall began in the first months of 1990, and was carried out by the Pioneers of the NVA (National People’s Army) and border troops of the GDR, with the help of various construction firms. Some of these firms, many of which worked for free, received segments of the Wall in gratitude, each with authentication certificates from Limex-Bau.

These certificates, issued by a defunct trading company, are the only official authentication for Wall pieces ever produced, and the little souvenir certificates embossed with an East German hammer that Pawlowski attaches to his tiny chips, meaningless though they are, are their only descendents.

For anyone seeking to find assurance that their lump of concrete is the real thing, the best authority is Pawlowski. “If you put twenty rocks in front of me, I think I could pick out the two or three real ones. The concrete has a unique structure,” he boasts.

“With complete segments it’s really easy. They have characteristic marks on them. For example, they have iron in them, with two holes drilled into the top, usually plastered over. Those holes have a certain arrangement that was unique to the Wall.”

Though he opens up when describing the structure of reinforced ferroconcrete, Pawlowski is tight-lipped when it comes to how much of the Wall is left, and where it is. He admits that there is a lot of it around the city and he has his sources. After the fall, many Wall parts were simply used to construct livestock sheds or makeshift containers. These individual segments are still visible, without being recognisable to the layman.

Another Wall expert, historian Ronny Heidenreich, who has traced parts of it around the world, says that the city is filled with traces of the Cold War barrier. It was used in road construction and it is buried in cellars.

“Last week, I saw around a hundred segments used to make various rough containers in an inner-city construction site in Neukölln,” he said referring to a district in western Berlin. “I’ve no idea if anyone knows what it is.”

For the rest of us, our only resource is the souvenir shop, and we have a 90 percent chance of getting one of Pawlowski’s painted pieces. In the Berlin Wall Documentation Centre on Bernauer Strasse, there are also some pieces for sale with original paint on them.

But maybe for the ultimate Berlin Wall authenticity, you can spend a night at a certain five-star hotel in the German capital that has offers guests the opportunity to chip away their very own piece from segment of the Wall. Certainly if you can afford it, perhaps the best souvenir is the interactive kind.