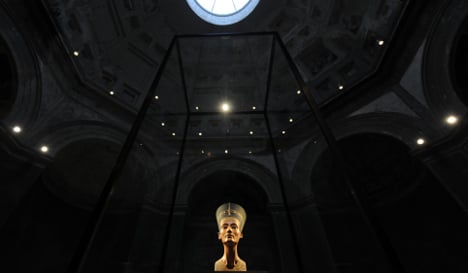 The 19th century UNESCO world heritage site on the city’s renowned Museum Island, restored to its former glory by British architect David Chipperfield, is the final resting place for the bust of Nefertiti, in Germany since 1913.

The bust was spirited out of Egypt and arrived in mysterious circumstances, with German archaeologist Ludwig Borchardt bringing the figure to Berlin a year after it was unearthed on the banks of the Nile.

Since then, Nefertiti, renowned as one of history’s great beauties, has been a source of friction between Egypt and Germany. Cairo alleges that Borchardt spirited it fraudulently out of the country and has demanded its return.

Despite her advanced years, Nefertiti is far from the oldest object on display at the museum.

That honour goes to a stone-age hand-held flint, estimated to be 700,000 years old.

Fittingly in the year Germany is celebrating 20 years since the fall of the Berlin Wall, the “newest” item on display is a piece of barbed wire from what the communists termed their “anti-fascist barrier.”

The restoration has sparked huge interest amongst Berliners, with around 35,000 visitors flocking to see the building itself – even without exhibits – during a two-day sneak-peek in March.

“This is an historic moment in the history of museums,” said Hermann Parzinger, president of the Prussian Cultural Foundation. “For the first time since the war, the five museums on the Museum Island are open again,” he said.

The museum was to be opened officially by Chancellor Angela Merkel on Friday but the public will have to wait one day more for their Nefertiti fix, although entry will be free over the weekend.

Speaking at a news conference on Thursday, the general director of museums in Berlin, Michael Eissenhauer, said: “It is thrilling, it’s wonderful, there is an electrifying power here.”

“I won’t ever experience a moment like this again in my life,” he added.

Matthias Wemhoff, the director of the prehistoric museum, said: “It is an exaggeration to say this is just a house for Nefertiti. This is a palace for archaeology.”

The museum will display other rare pieces such as the head of a Neanderthal child with its teeth still intact and a Celtic helmet from the fourth century BC.

But amid the fanfare, the lingering row over the museum’s star attraction refused to go away, with Egyptian antiquities chief Zahi Hawass giving a series of interviews in the German press claiming Nefertiti for his country.

Hawass told the Kölner Stadt-Anzeiger daily that his officials had launched an investigation into how Nefertiti came to Germany.

“If she left Egypt illegally, which I am convinced she did, then I will officially demand it back from Germany,” he said.

Parzinger said he would hand over any relevant documents to the Egyptian authorities, but that he was “confident” Nefertiti’s residence in Berlin was all above board.