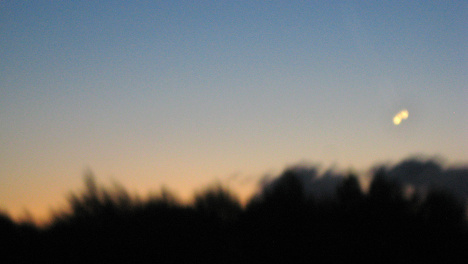 A photo of the object near Kiel in Schleswig-Holstein. Photo: DPA

Reports of a “burning sphere” and “glowing object in the sky” came in from Bremen, Brandenburg, Hamburg, Lower-Saxony and Schleswig-Holstein around 7 pm. A Bremen police spokesperson said once caller reported seeing the unidentified flying object (UFO) as it “broke apart and fell to the earth.”

Authorities confirmed that there were no plane crashes in the area.

“In Bremen and Lower Saxony no evidence of impact or damages has been found,” the spokesperson said. “We assume that it was a meteorite.”

Meanwhile Mannheim-based hobby astronomer Werner Walter, who runs CENAP, a UFO research network and sighting hotline, said he took calls late into the night. Descriptions of the incident included a “white-green glowing orb” with a “vapour trail” that fell “silently for several seconds from the sky.”

Walter also said he suspected the object was a meteorite.