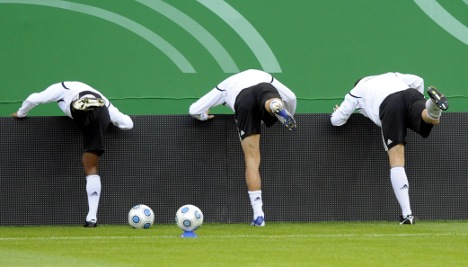 Germany booked their berth at next June’s World Cup when they won 1-0 in Moscow on Saturday night, but with his side undefeated at the top of Group Four, Löw is calling for a ninth win in ten qualifying matches.

“We want the three points, we want to finish this qualification phase with a win,” said Löw ahead of the clash at Hamburg’s HSH Nordbank Arena.

Löw said Stuttgart’s Brazil-born striker Cacau will start alongside Bayern Munich’s Mario Gomez, while Hoffenheim’s Andreas Beck will play on the right side of the defence and Hamburg’s Piotr Trochowski will start on the wing.

The 33-year-old picked up an ankle injury in Moscow and Löw is keen to give other people their chance to play.

“This is their chance to show me they are ready for a World Cup,” said Löw. “Michael will play maybe a half or 60 minutes, we have to be aware of his workload with Champions League games coming up.”

Meanwhile Turkey coach Fatih Terim says he will resign after Wednesday’s game with Armenia now his side are unable to qualify for the World Cup and Löw has been linked to the role by the Turkish media.

The 49-year-old German has twice coached Turkish sides, but insists he is fully focused on the Germany job.

“I haven’t heard anything about it, I know Turkish football and there are lots of names being mentioned for the job. But for me it is not a theme and I am just concentrating on my job,” he said.

Germany join fellow European heavyweights England, Italy, Spain and the Netherlands who have already qualified for the World Cup and Loew says he has been surprised by the form of other big sides.

“Germany is always amongst the favourites for a major tournament and we have a good basis to win the title in South Africa,” said Löw. “For the moment, I have a good feeling about next year, we have been building for five years towards this tournament.”

Löw also revealed who makes up the backbone of the Germany side in his first-choice line-up alongside captain Ballack.

“Philipp Lahm is a very consistent player and is absolutely appreciated by the team, as is defender Per Mertesacker,” said Löw.

“He is totally reliable and strong, whenever we meet strong opponents. “Also Bastian Schweinsteiger is held in high regard because he has matured into his role in midfield,” he said. “And striker Miroslav Klose has always justified my confidence in him over the years.”