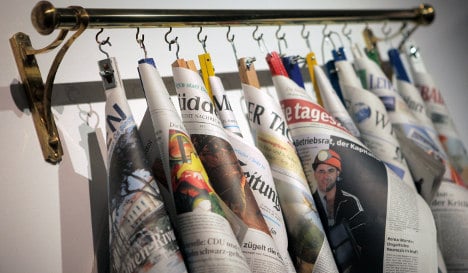 Customers choose what topics they want to read about – be it sport, politics, fashion or any from a wide choice – and receive news only on their chosen subjects collected together and delivered like any other paper.

Articles are pulled together from major German papers such as Handelsblatt, Bild and Der Tagesspiegel, plus foreign titles such as the International Herald Tribune or the New York Times, as well as major blogs and Internet news sources.

The newspaper, called “niiu” will carry articles in both English and German and is aimed primarily at students, explained founders Hendrik Tiedemann, 27, and Wanja Soeren Oberhof, 23.

Students would pay €1.20 for their daily news fix whereas others would be expected to stump up €1.80. Mass-circulation daily Bild costs €0.60, and the Der Tagesspiegel €0.95 in Berlin.

Unveiling the concept at a news conference on Tuesday, the entrepreneurs acknowledged that founding a new paper when traditional media are suffering from competition online was a risky venture.

However, they said that young people are tired of trawling the internet for news and would pay for the personalised, tailored service that niiu would offer.

“Our feedback has shown that people prefer to read from paper,” said Oberhof.

Oberhof and Tiedemann aim to have 5,000 clients in the next six months in Berlin before extending the concept throughout the whole of Germany.

In addition, they said they hoped to make money from advertisers “because they can do very targeted advertising and reach exactly the readers they want.”

The first editions will be rolling off the presses on November 16, they said, and will be available from Monday to Saturday.

Eventually, clients will also be able to choose the length of the paper delivered – for example, eight pages on a busy Monday but 60 pages on a Friday when there is more time to read.

Initially, the paper will be 16 pages.