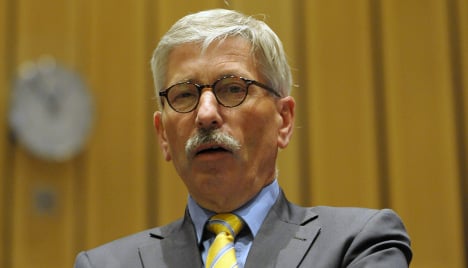 The 64-year-old, who served as Berlin’s finance senator before joining the central bank’s, lost control of the institution’s cash operations, however, he will retain responsibility of information technology and risk control.

The Bundesbank gave Sarrazin’s other division to fellow board member Hans Georg Fabritius after a meeting in Frankfurt and said the decision would go into immediate effect.

Internal sources said that Bundesbank President Axel Weber had made a particular effort to disempower Sarrazin after he made the remarks that sparked widespread outrage.

In a recent interview with the Lettre International magazine Sarrazin claimed that “a great many Arabs and Turks in [Berlin], whose numbers have grown because of the wrong policies, have no productive function other than as fruit and vegetable sellers.”

The remarks raised the calls for his resignation after Weber said they had caused “damage to the institution’s reputation.”

Though he has since apologised for the remarks, Sarrazin refused to step down from the Bundesbank’s board. According to news magazine Der Spiegel, the bank’s legal department found his comments were not grave enough to allow for a dismissal.

Meanwhile a survey by pollster Emnid for Bild am Sonntag over the weekend found that 51 percent of Germans largely agreed with Sarrazin, while just 39 percent disagreed.