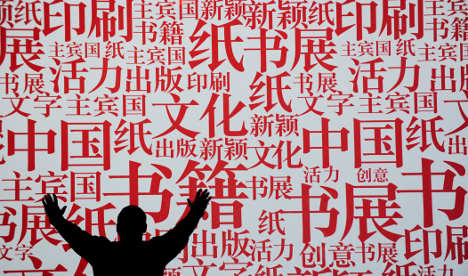 Gottfried Honnefelder, president of the German publishers and booksellers association, told the opening press conference he hoped “our colleagues, the authors and publishers in China, will be given the freedoms they need to live their lives and do their work.”

Fair director Juergen Boos said the trade show had to “make sure we can present many voices,” and said he looked forward to a “controversial and not always convenient book fair.”

Dissident Chinese poet Bei Ling told another press briefing he and others wanted visitors to the fair to hear not only the “officials writers voice.”

“We have another voice, this underground literature voice, underground poetry,” Bei said at an event sponsored by The International Society for Human Rights.

German Chancellor Angela Merkel has already said she would not avoid thorny topics in her meetings with Chinese Vice-President Xi Jinping, tipped as a possible successor to President Hu Jintao.

“In my talks I will make it clear to Chinese representatives that freedom of opinion is not a threat, but an opportunity,” Merkel, who angered the Chinese government by meeting the Dalai Lama in 2007, said in her weekend podcast.

Merkel and Xi are to officially open the world’s biggest book fair at 5 pm.

The fair “is an unique opportunity for China to present the richness of its culture and its literature,” Merkel said in the podcast. “I hope therefore that China makes use of the opportunities that this presents.”

In mid-September, a symposium organised ahead of the trade show sparked controversy when poet Bei Ling and journalist and environmental activist Dai Qing were invited and then “de-programmed” owing to protests from Beijing. Following a German uproar, the pair were finally asked again to attend, causing part of the official Chinese delegation to storm out.

China’s ambassador to Germany, Wu Hongbo, called the action by the fair’s hosts “unacceptable,” and said it was “not an expression of respect for their Chinese partners.” But Herbert Wiesner, head of the German chapter of the writer’s defence

organisation PEN, said that “Chinese organisers have mistaken themselves for

“We always knew there would be protests,” fair director Boos told journalists in Berlin last week. “There is no doubt; there is censorship in China, we are far from a democracy. But when the contract was signed with Beijing three years ago, we

stipulated there would be complete freedom of expression,” he said.

Less than half of the 500-odd events with a Chinese theme will be organised by Beijing, he explained.

Dozens of non-governmental organisations, many of which are human rights groups, will also be present, and hope they will not be ignored when Merkel inaugurates the show.

The book fair is used to controversy and last year’s guest, Turkey was also taken to task for curbing freedom of expression.

Some 6,900 exhibitors from around 100 countries are to gather in Frankfurt until Sunday, around 400 fewer than last year, and each publisher has trimmed the size of its participation. Last year, it welcomed 300,000 visitors.