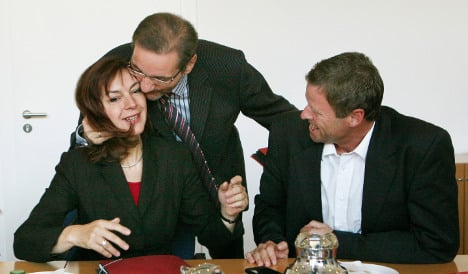 Christian Democratic state chairwoman and outgoing culture minister Johanna Wanka branded the swing to the left “a betrayal of 1989.”

The Social Democrats had held exploratory talks with both of the other parties but the way forward with the Left was cleared on the weekend when the party’s Brandenburg parliamentary leader, Kerstin Kaiser, ruled herself out of a ministry post because of concerns over her past links with the feared East German secret police, the Stasi.

On Monday, Kaiser said she was optimistic that the coalition would be able to offer “sound policies” over the next five years.

At the top of the agenda would be putting social issues front and centre of dealing with the economic crisis.

The Christian Democrats’ Wanka slammed the fact that, 20 years after the fall of the Berlin Wall, the “heiress” of the East German Socialist Unity Party (SED) was to take power.

“It is truly sad and dramatic, that we now have a red-red experiment,“ she said. “I’m certain that the SPD will lose out because of it.”

She believed Platzeck had bowed to pressure from within his party for a leftward lurch.

The Left’s general secretary, Dietmar Bartsch, said the planned red-red coalition would be a great challenge for his party. He said the coalition would be the first true “grand coalition” in Brandenburg, as the Social Democrats and the Left were the two strongest parties in the state.

Platzeck said the decision among senior Social Democrats to embrace the Left had been unanimous but refused to give reasons, saying details must first be discussed with the party.

In the election on September 27, the Social Democrats took 33 percent of the vote, the Left 27.2 percent and the Christian Democrats 19.8 percent.