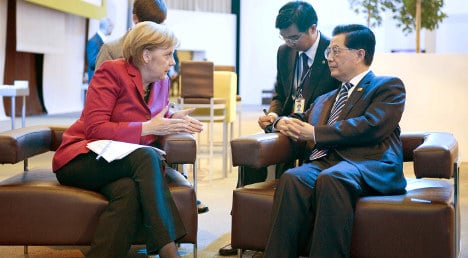 “In my talks I will make it clear to Chinese representatives that freedom of opinion is not a threat, but an opportunity,” Merkel, who angered the Chinese government by meeting the Dalai Lama in 2007, said in her weekend podcast.

Merkel was due to receive Chinese Vice-President Xi Jinping, tipped as a possible successor to President Hu Jintao, for a working lunch, the German government said. No news conference was planned.

Merkel’s spokesman said last week that the discussions would touch on bilateral and international issues including climate change, and with China and Germany the world’s two biggest exporters, the economy.

On Tuesday, Merkel and Xi are due to open the Frankfurt Book Fair, the world’s largest, with China this year’s guest of honour.

The book fair “is a unique opportunity for China to present the richness of its culture and its literature,” Merkel said in the podcast. “I hope therefore that China makes use of the opportunities that this presents.”

In mid-September, a symposium organised ahead of the fair sparked controversy with two dissident Chinese intellectuals initially invited and subsequently “de-programmed” owing to protests from Beijing.

Following a German uproar, the pair were finally asked again to attend, causing part of the official Chinese delegation to storm out.

China’s ambassador to Germany, Wu Hongbo, called the action by the fair’s hosts “unacceptable”, and said it was “not an expression of respect for their Chinese partners”.