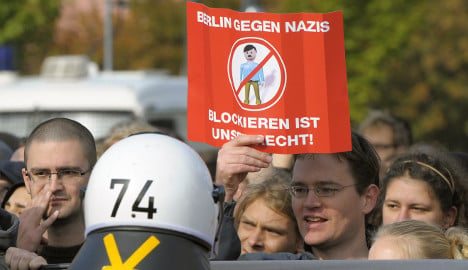 Within hours of the protest in central Berlin, a video was posted online that showed a woman being dragged by her arm across pavement by a policeman and a man being violently thrown onto stone steps.

Observers of the demonstration told the paper the man – who they said was drunk and possibly suffering from mental illness – was later treated by paramedics from the fire brigade.

He had tried to throw a bottle and had been identified by police an hour earlier at Strausberger Platz in Friedrichshain for hurling abuse, the paper reported.

“It looks bad at first,” said a police source.

But it did not show the events leading up to the man’s arrest, the source said, and it was therefore impossible to assess the situation properly from these few seconds of footage.

“We are checking the facts,” said a police spokesman.

The police operation was also to be discussed on Monday in a Berlin state parliament interior committee meeting.

“This treatment was too rough, even if the person may have been causing a disturbance,” said the Greens’ interior policy expert, Benedikt Lux.

On the whole though, the police had had control of the situation, he said.

The incident follows the allegedly rough arrest of a left-wing demonstrator in Berlin four weeks ago. The scene, which made headlines around the country, was also filmed and posted on the Internet.

Police chief Dieter Glietsch has opened an assault investigation over the incident.

Owing to the disastrous publicity over that video, Glietsch announced that individual name tags for police would be introduced in 2010. Such personal identification tags have been discussed for years.

At the moment, police attending demonstrations and riots have only a four-digit number showing on their helmets and on the back of their uniforms. However, up to 10 officers have the same number, making exact identification difficult.

The chairman of the Berlin police union, Eberhard Schönberg, defended the actions of police on Saturday, stressing that bodily force was allowed during arrests.

“Punching and kicking are exercised,” he said.

At such demonstrations, massive resistance by protesters was now the norm, he said.

“No one lets themselves be arrested voluntarily,” he said. “Are we supposed to pull them by the ear?”

It was common for bystanders to try to obstruct arrests and even free people already in police hands, Schönberg said.

“Therefore, there will continue to be an image that looks brutal and angry,” he said.